By CCN.com: Tesla CEO Elon Musk shrugged off CNBC host Jim Cramer’s latest dig the way one would shoo away a pesky fly at a picnic.

“Cramer is a simulation,” Musk snarked on Twitter. “He’s not real.”

Musk was reacting to Cramer’s criticism that Elon is a “master deflector” like the late P.T. Barnum.

Cramer is a simulation. He’s not real.

Musk’s tepid reaction to Cramer was mild compared to some of his other Twitter takedowns.

As CCN.com reported, Elon mocked billionaire Jeff Bezos after the Amazon CEO announced plans to launch a constellation of satellites into space.

Musk reminded Bezos that his company, SpaceX, had already done that last year by calling him a copycat. Musk made sure to tag Bezos on his catty Twitter smackdown.

Musk (net worth: $20 billion) probably didn’t go hard against Jim Cramer because he realizes that Cramer (net worth: $100 million) is small potatoes compared to him.

Jim Cramer then fired back on Twitter with a lame riposte, screeching: “How could I be a simulation?”

Nothing to see here, @ElonMusk… pic.twitter.com/QS2wVsBWqf

On April 29, Cramer kept talking about Musk, but softened his criticism.

.@ElonMusk, we checked again just for you: @JimCramer is real and here is your proof: pic.twitter.com/FwUB0SgCR6

A disgusted Musk snarked back: “Shallowfake.”

As a reminder, P.T. Barnum was a flamboyant American businessman who founded the Barnum & Bailey Circus. He’s most famous for his outlandish PR stunts.

Like brash publicity hound PT Barnum, Jim Cramer has found a way to keep himself in the headlines — by trash-talking Elon Musk.

Elon Musk Should be Forced Out as CEO of Tesla: Jim Cramer https://t.co/n0m5kSPKO8

Of course, the irony is that Cramer is far more of a shameless self-promoter than Elon Musk is. Indeed, the foundation of Cramer’s entire TV career are his carnival-barking antics.

Over the years, Cramer has donned an embarrassing array of ridiculous costumes while hosting his aptly-named CNBC show “Mad Money,” where he presumably offers investment analysis.

We have yet to see Musk prance around in absurd outfits in a bid to promote his ambitious business ventures.

Flashback: In 2008, Cramer urged viewers not to dump Bear Stearns

Then there’s this: In March 2008, Cramer urged his CNBC audience to not sell Bear Stearns stock because the flailing “Bear Stearns is fine!”

CRAMER: “Peter writes, ‘Should I be worried about Bear Stearns’ liquidity and get my money out of there?'”

“Do NOT take your money out! Bear Stearns is not in trouble! Don’t move your money from Bear. Don’t be silly!”

At the time, Bear Stearns stock was trading at $69 a share. Five days later, the troubled bank collapsed and was acquired by JP Morgan for $2 a share after the government asked JPM to rescue it.

Cramer’s Bear Stearns call was so horrific that comedian Jon Stewart tore into him in a hilarious 2009 monologue. 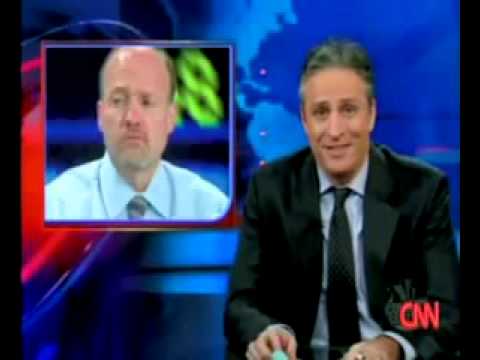