By CCN.com: Boeing can’t seem to keep itself out of the news – for all the wrong reasons. Last night a military aircraft with 143 people on board skidded off a runway at Naval Air Station Jacksonville and crashed into St. John’s River. Could this add further pressure to the Dow’s largest individual stock?

Boeing 737 Ends Up in the Water

The Miami Air charter flight from Guantanamo Bay was carrying 136 military personnel and seven crew members when the botched landing resulted in an evacuation from a river. Everyone onboard escaped, with only minor injuries reported.

FAA says this was a DOD charter flight from Guantanamo Bay to Naval Air Station Jacksonville. It went off the runway into shallow water. Initial reports of two minor injuries. Everyone is off the plane. It’s a Miami Air International Charter https://t.co/1knBvxWTIh

The cause of the incident is unknown. Naval Air Service Jacksonville captain Michael Connor described the situation as a “miracle,” given nobody was seriously injured and nobody killed.

“I think it is a miracle. We could be talking about a different story this evening.” 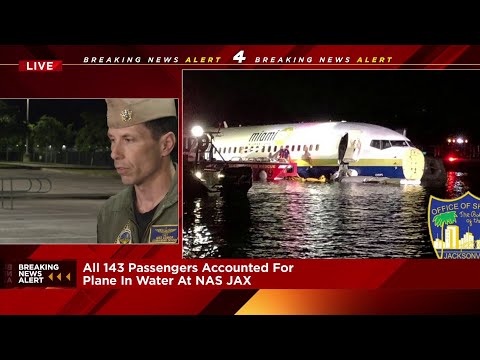 But while it’s not clear what caused the crash, it promises to deliver Boeing another public relations nightmare.

That tragedy came just months after a Lion Air crash in Indonesia claimed 189 lives. Both aircraft were 737 MAX models, which have now been grounded in more than two dozen countries worldwide. A number of orders for the aircraft have been canceled, including Garuda Airlines’ recent cancelation of 50 aircraft, in a blow to Boeing worth $4.9 billion.

Boeing faces the possibility of $600 billion worth of orders or potential orders being canceled, by airlines ranging from VietJet Air in Vietnam, Malaysian Airlines, Kenya Airlines, Garuda, and Lion Air.

Boeing stock plunged ten percent after the Ethiopian Airlines disaster as President Trump announced the embattled airlines MAX models would be grounded. The incident dragged on the Dow Jones Industrial Average, as BA shares rank as its most heavily weighted component.

The manufacturer’s original assertion that the pilots of the doomed Ethiopian Airlines flight were to blame for the accident has since been retracted by the company. CEO Dennis A. Muilenburg has since attributed the Lion Air and Ethiopian Airlines crashes to the aircraft’s anti-stall feature:

“The full details of what happened in the two accidents will be issued by the government authorities in the final reports, but, with the release of the preliminary report of the Ethiopian Airlines Flight 302 accident investigation, it’s apparent that in both flights the Maneuvering Characteristics Augmentation System, known as MCAS, activated in response to erroneous angle of attack information.”

Whether the aircraft manufacturer can repair the software and design flaws plaguing its MAX models is yet to be seen. The sooner it does, the sooner the clouds that overhang it will be lifted.

Boeing stock closed at $376.46 on Friday as the Dow rallied 197 points. Don’t be surprised if the Miami Air crash weighs on both BA and the DJIA on Monday.

An Australian living in Brooklyn, Paul de Havilland is a fan of disruptive technologies, an active VC investor in promising startups, and has experience covering both traditional and emerging asset classes. His passion is violin and opera - he is a long-time student of a protege of Placido Domingo. Get in touch at on Twitter or by email pauldehav11 [a] yahoo.com