Presidential candidate Elizabeth Warren has gotten a chilly reception on Wall Street, but one tech entrepreneur is willing to extend an olive branch.

Microsoft Co-Founder Bill Gates said he would be willing to meet with the Senator to discuss solutions to wealth inequality and poverty.

The idea of a meeting was first floated after Bill Gates spoke with The New York Times writer Andrew Ross Sorkin at the DealBook conference. 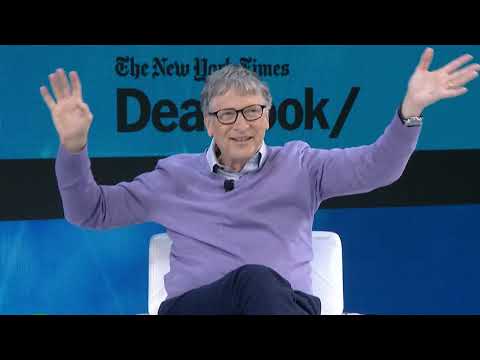 During their conversation, Sorkin asked Gates about his thoughts on Warren’s proposal for a wealth tax. Gates at first appeared on board with the idea, saying:

I’m all for super-progressive tax systems…I’ve paid over $10bn in taxes. I’ve paid more than anyone in taxes. If I had to pay $20bn, it’s fine.

However, Gates quickly followed up on his initial comments, revealing concerns with Warren’s tax plan:

But when you say I should pay $100bn, then I’m starting to do a little math about what I have left over. Sorry, I’m just kidding… So you really want the incentive system to be there and you can go a long ways without threatening that.

According to Forbes, Gates is the second-richest person in the world, boasting a net worth of $106.9 billion.

Gates has repeatedly stated he has a responsibility to share his wealth. However, similar to Galaxy Digital CEO Michael Novogratz, the Microsoft co-founder isn’t convinced that Warren’s wealth tax is the way to go. Instead, he would prefer modifying other tax codes.

While speaking during a Reddit “Ask Me Anything” in February, Gates said billionaires like himself could pay more through making capital gains taxation “more like ordinary income” and “having an estate tax more like we had in the past.”

In the Reddit “Ask Me Anything,” Gates also said:

I have paid $10 billion but I should have had to pay more on my capital gains.”

According to CBS News, Warren’s wealth tax would add a 6% surcharge on fortunes above $1 billion, and the revenues would go towards funding her Medicare-for-all plan.

So how much would Gates pay under a Warren presidency? According to Warren’s very own “billionaire calculator,” the philanthropist would pay $6.379 billion.

Some billionaires seem confused about how much they would pay under my #TwoCentWealthTax. Don’t worry, we've got a calculator for that, too.

The bottom line: If you made it big, you should chip in to make sure everyone else also has a chance to succeed: https://t.co/6UMSAf90NT

However, while in discussion with Sorkin, Gates stated he would be fine paying up to $20 billion in taxes. So what’s the billionaire’s issue with Warren’s plan? According to comments made to Sorkin, Gates is concerned that her plan could dry up the incentive and motivate entrepreneurs to move elsewhere.

Gates and Novogratz aren’t the only billionaires with concerns. During the last day of the Greenwich Economic Forum, billionaire and hedge fund manager Marc Larsy predicted a Warren Presidency would crash Wall Street.

Opposition to the wealth tax aside, Gates has said he’s willing to talk with the Massachusetts Senator.

During the Dealbook conference, Sorkin asked Gates if he would be interested in speaking with the Senator about her tax plan. In response, Gates joked:

I’m not sure how open-minded she is or that she’d even be willing to sit down with somebody who has large amounts of money.

The comment sparked the Massachusetts Senator to reach out to Gates over Twitter and offer a meeting to explain her wealth tax.

I’m always happy to meet with people, even if we have different views. @BillGates, if we get the chance, I’d love to explain exactly how much you’d pay under my wealth tax. (I promise it’s not $100 billion.)

Gates later replied to the Senator in a series of tweets.

A Meeting in the Works?

Now that both Warren and Gates have said they’d be willing to talk, the obvious next step is to arrange a time and place. Based on the nature of the tweets, it looks like a discussion between the two would be amicable and constructive. Whether it will result in an endorsement from the philanthropist is another story.