Despite CEO Jamie Dimon’s history of anti-bitcoin rhetoric, JPMorgan plans to pilot-test its own JPM Coin cryptocurrency later this year.

JPMorgan claims more of its clients in the United States, Europe, and Japan have been clamoring for its prototype cryptocurrency to accelerate securities trading such as bonds.

Not surprisingly, this announcement comes just as the bitcoin price is soaring above $11,000 amid the beginnings of a potential crypto bull run.

Umar Farooq, the head of blockchain at JPMorgan, told Bloomberg that the JPM Coin could enable “instant” delivery of bonds on a blockchain. The JPM Coin operates on Quorum, an Ethereum-based blockchain platform JPMorgan developed with Microsoft.

“We believe that a lot of securities over time — in five to 20 years — will increasingly become digital or get tokenized.”

The timeline for JPM Coin’s implementation is still fuzzy, because it needs to clear regulatory hurdles. However, Farooq claims the JPM Coin’s development is progressing nicely.

“The technology is very good, but it takes time in terms of licensing and approval. As long as you are a bank, you must make sure that it does not violate the regulations of all the countries or regions where you operate in.”

JPMorgan is the largest U.S. bank, with $2.7 trillion in assets under management. In February 2019, JPMorgan became the first major US financial institution to launch its own cryptocurrency.

As CCN.com reported, the JPM Coin is supposed to serve as a stablecoin for clients holding US dollars in international jurisdictions. Each JPM Coin is worth one U.S. dollar and can be swapped for physical currency.

JPMorgan’s foray into crypto stunned Wall Street because of CEO Jamie Dimon’s vocal anti-bitcoin animus. Dimon is of the “blockchain, not bitcoin” camp.

Dimon has praised blockchain as an innovative technology while dismissing bitcoin as a “fraud” that only attracts “stupid” investors.

“I couldn’t care less what bitcoin trades for, how it trades, why it trades, who trades it. If you’re stupid enough to buy it, you’ll pay the price for it one day…Governments are going to crush it.” 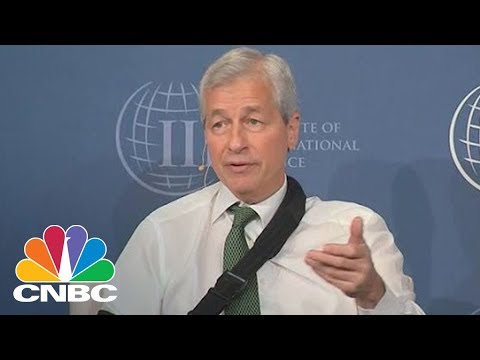 Dimon has recently toned down his anti-crypto rants as the industry continues to generate headlines amid a flurry of activity. Perhaps it’s because corporate juggernauts like Facebook launched its own “cryptocurrency” called Libra.

Facebook continues to be roiled by nonstop data breach scandals. However, the social media monopoly claims that Libra is built on a secure, scalable, and reliable blockchain, backed by a reserve of real assets.

Cryptocurrency fans are divided on whether Libra will be good or bad for the market. But Binance CFO Wei Zhou warns that Facebook CEO Mark Zuckerberg is a megalomaniac who’s bad for the industry.

Zhou says Zuckerberg is launching Libra in order to squeeze crypto companies out of the dominance he eventually wants to assert over the space.

Misguided bitcoin evangelists have been screeching that having a massive multinational conglomerate like Facebook test out use cases for blockchain lends legitimacy to the nascent industry.

However, Zhou — a former Harvard classmate of the Facebook CEO — says Zuckerberg isn’t doing that to promote mainstream adoption of crypto or blockchain. To the contrary, Zuckerberg wants to make the social media monopoly a closed, centralized crypto-ecosystem that he will assert total control over, Zhou says.

Samantha Chang
Samantha Chang is a New York City-based financial editor who writes about crypto and business at CCN. She is a law school grad and an alum of the University of Pennsylvania. You can reach her on Twitter at Samantha Chang or email her at schang121@juno.com.
Subscribe
0 Comments
Inline Feedbacks
View all comments
← PreviousDow Shivers Paralyzed with ‘Screaming’ Stock Market Warning Signs
Next →Tesla Stock Shorters Think Elon Musk is Bluffing

How the Fed’s Gloomy Outlook Could Boost Bank Stocks
September 21, 2020 No Comments

Moderna Hype Is About to End in Tears: JPMorgan
July 20, 2020 No Comments

Nikola Stock Is 35% Too Expensive – But Millennials Keep Piling in Anyway
June 23, 2020 No Comments

Mortgage Rates Are Crashing – But That Won’t Save the Housing Market
June 14, 2020 No Comments