These alarming findings were uncovered in a personal finance survey from the National Opinion Research Center (NORC) at the University of Chicago.

Low-Income and Hispanic Households Would Suffer Most

The study found that millions of Americans would be unable to pay their mortgages or rents and cover basic necessities without dipping into their savings or using credit cards.

Notably, 67% of low-income households (defined as those earning less than $30,000 a year) and 65% of Hispanic households would suffer the greatest hardships from income disruption.

The poll — which was compiled using 1,010 interviews of American adults over age 18 — was conducted between January and February 2019.

Even Short Income Disruptions Cause Hardship

Angela Fontes is the director of the Behavioral and Economic Analysis and Decision-making program at NORC at the University of Chicago.

Fontes says these disturbing findings show that millions of Americans are dangerously vulnerable to falling into debt.

“Even short disruptions in pay can cause significant hardship, as most Americans appear to be living paycheck-to-paycheck. The issue is particularly salient for Hispanic and for low-income households. The vast majority of these households would need to begin depleting savings, if they have any, sooner.”

Fontes says most households would respond to income disruptions by doing the following:

Angela Fontes says resorting to predatory short-term loans is a dangerous and slippery slope that low-income households are especially vulnerable to.

“Research shows that high interest rates on credit cards and short-term loans can be particularly dangerous fallback options that may increase debt and financial challenges over time. While the funds made available through a short-term loan may address an immediate financial need, these quick-fix solutions frequently come with long-term consequences.”

78% of Americans Live Paycheck to Paycheck

This latest research from the University of Chicago confirms previous findings from CareerBuilder showing that a shocking 78% of American workers live paycheck to paycheck. (video below.)

Mike Erwin, a spokesman for CareerBuilder, says stagnant wages and the rising cost of everything – from consumer goods to education – is fueling this disturbing phenomenon.

Surprisingly, Erwin says this trend isn’t just among low- or middle-income Americans but across all income ranges. And this is a serious wake-up call for all Americans.

“Living paycheck to paycheck is the new way of life for U.S. workers. It’s not just one salary range. It’s pretty much across the board. And it’s trending in the wrong direction.”

So while unhinged Democrats and the American media screech nonstop about President Donald Trump, they are largely ignoring “kitchen-table” issues that actually affect real-life Americans much more than Russia! Russia! Russia! hysteria. 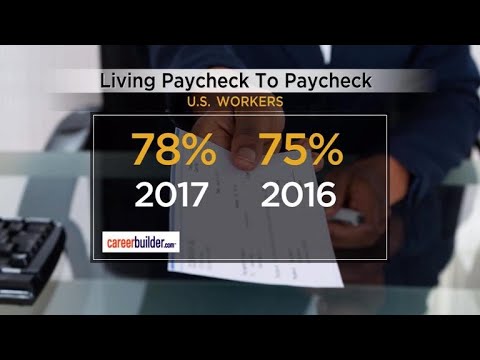