Tesla is thriving. It plans to distribute cars manufactured from the Shanghai Gigafactory to both Asian and European markets. The TSLA stock price soared 3.76% in pre-market, following a strong 12.46% rebound since September 8.

The electric carmaker has many potential fundamental catalysts that could fuel TSLA stock in the coming months.

According to Bloomberg’s sources, the Tesla Shanghai Gigafactory would likely begin mass production in Q4.

The factory intends to ship the Model 3s to Singapore, Australia, New Zealand, and Europe. That would reduce the waiting period for customers expecting shipments from the U.S.

Tesla planning to kickstart mass production at the Shanghai Gigafactory is optimistic for TSLA stock because of its capacity.

Reports say that the Shanghai Gigafactory has an annual production capacity of 200,000 cars. To understand how big this capacity is, Tesla produced and delivered 90,650 vehicles in the blockbuster Q2.

In Fremont, California, Tesla’s main Gigafactory has an expected production capacity of 400,000 to 500,000 units. The two Gigafactories alone could manufacture 700,000 vehicles a year, which could handle 175,000 vehicles per quarter.

“We are installing additional machinery at the Fremont Factory, which is expected to increase total Model 3 / Model Y capacity from 400,000 to 500,000 units per year.”

The sheer speed of Tesla’s factory expansion that allows infrastructure to strengthen long-term growth is a major catalyst for TSLA stock.

Atop the rapidly expanding capacities of California and Shanghai Gigafactories, Tesla is building more factories in the U.S.

Tesla reportedly plans to finish the construction of its Texas Gigafactory by May 2021. The factory would primarily manufacture the highly anticipated Cybertruck.

In the near term, Tesla expects an S&P 500 inclusion, the battery technology day, and a robust Q4.

In the longer term, Tesla faces the completion of the Texas Gigafactory, which would fasten the process of shipping Cybertrucks.

TSLA stock has fundamental catalysts in both the short to medium term as Tesla aggressively expands throughout the pandemic.

The TSLA stock fell steeply in early September after the Nasdaq saw a steep pullback. Watch the video below: 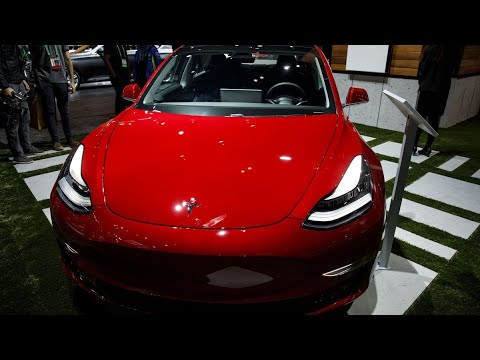 A strong reception in China supplements the carmaker’s high sales and production capacity expansion in a highly potent market.

In its Q2 report, Tesla said the Model 3 had seen exceptional demand in China. It became the bestselling EV and has competed against premium sedans. The company said:

“Model 3 has received a strong reception in China, not only becoming the bestselling EV, but also competing with mid-sized premium sedans, such as BMW 3- series and Mercedes C-class. This is not surprising given Model 3’s lower price point (even before subsidies and vehicle tax), reduced operating costs and industry leading equipment.”

Tesla is already positioned for speedy medium-term growth in China with demand supplementing the company’s expansion.