JPMorgan expects the Fed to ease rates again in October. Over the weekend, CNBC anchor Carl Quintanilla tweeted the investment bank’s statement from his iPhone:

Slowing job growth is one indication of a slowing global economy.

The September jobs report put U.S. unemployment at its lowest level in 50 years. But 136,000 new jobs were fewer than the Dow Jones consensus estimate projecting 145,000 last month. And record-low job numbers are historically a harbinger of recession ahead.

Meanwhile, September’s ISM manufacturing index shows manufacturing is already in a recession. Production is at its weakest levels since 2009. Many analysts point the finger at Donald Trump’s trade war with China for the weak manufacturing numbers. 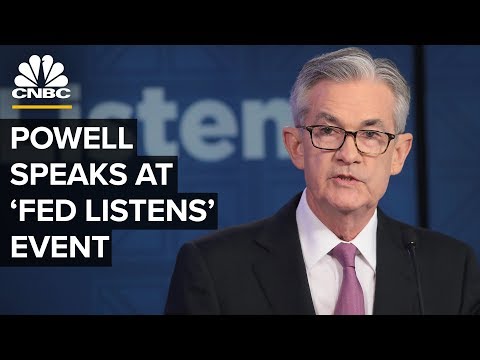 “While we believe our strategy and tools have been and remain effective, the U.S. economy, like other advanced economies around the world, is facing some longer-term challenges.”

At the end of last month, St. Louis Fed President James Bullard told CNBC’s Closing Bell audience that the Fed will cut interest rates again before the year is out:

“We’ve made a big move. I think we probably have a little bit more to go here.”

Derivatives, options, and futures traders are now pricing in a 92% chance of a quarter-point rate cut when the Fed meets Oct. 29-30; All Hallows’ Eve is Thursday, Oct. 31. Markets give 50-50 odds of another reduction in December.

“This downturn is starting to spread and that means the tea leaf readers at the Fed are going to be teeing up a third rate cut this year when they next meet again at the end of this month.”

But would another Fed rate cut be a trick or a treat?

Wall Street seems to think it would be a treat. The stock market hangs on the Fed chair’s every word and ebbs and flows according to his slightest innuendo or twitch.

Derivatives traders also have a big appetite for that easy money.

Economist and investment manager Milton Ezrati, however, thinks more policy rate cuts are a trick. In a Forbes editorial Friday, he points out that Fed policy since the Great Recession has turned lower interest rates into fuel for equities bubbles, not circulating credit to boost the economy:

“The impact is evident in the money supply figures. The Fed increased reserves some 35% a year between 2009 and 2018. Yet, the powerful increase in lending power during this time only boosted the narrow M1 measure of money, the funds actually circulating in the country, some 10% a year.”

Instead of increasing commercial, industrial, and personal loans, expanding reserves have mostly spilled over into Wall Street, pushing up equities prices. He sees an asset price bubble ahead as the Federal Reserve continues to cut interest rates.