Google will meet next week with America’s military brass to allay Washington’s concerns that it’s helping China’s artificial intelligence (AI) program while refusing to assist the Pentagon with tech initiatives.

Chairman of Joint Chiefs of Staff General Joseph Dunford said on Thursday that the internet giant is “assisting the Chinese military in advancing technology,” and such an effort “is not in U.S. national interests.” He made the remarks at Atlantic Council event, an American think-tank.

At last week’s Senate testimony, he said Google “indirectly benefits the Chinese military.” At the same congressional hearing, acting secretary of defense Patrick Shanahan voiced concerns that American innovation is being used against itself. That is, U.S. tech is stolen by China only to weaken America’s businesses and military competitive edge. 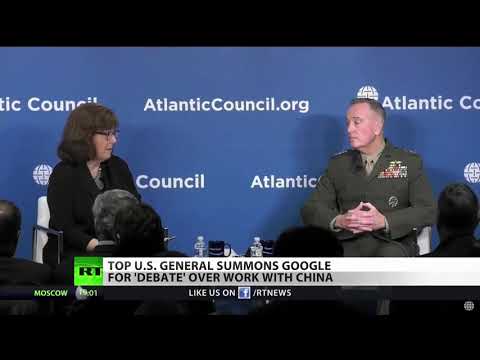 $5 trillion of their [China’s] economy is state-owned enterprises. The technology that has developed in the civil world transfers to the military world. It’s a direct pipeline. Not only is there a transfer, there is systemic theft of U.S. technology that facilitates even faster development of emerging technology.

Gen. Dunford is the nation’s highest-ranking military officer. He’s the principal military adviser to President Donald Trump and the national security apparatus. He is “tentatively scheduled” to speak with Google reps in Washington D.C.

U.S. leaders are concerned that Google opened an artificial intelligence lab in Beijing in 2017. The lab develops software such as TensorFlow, a popular AI tool that has been downloaded two million times by Chinese users. It also conducts research on natural-language understanding and market algorithms.

Among its many applications, TensorFlow (an open-source project) is used for machine-learning to classify, perceive, understand and predict outcomes based on massive data. Critics say the capability intimidates the west given that Beijing will likely use AI and machine-learning for military, spying and other threatening purposes.

America’s and China’s artificial intelligence programs are considered among the most advanced in the world.

On Sunday, Google issued a statement in response to criticism from the White House and U.S. defense establishment:

In 2018, Google withdrew from Project Maven, A U.S. military program that uses artificial intelligence to analyze images collected by drones. Last week, President Trump criticized the company via Twitter for “helping China and their military, but not the U.S.”

Google is helping China and their military, but not the U.S. Terrible! The good news is that they helped Crooked Hillary Clinton, and not Trump….and how did that turn out?

US officials are concerned that Google cannot control downstream use of the Beijing lab’s artificial intelligence innovations. Downstream use means that AI initially designed for civilian purposes (such as language recognition) may be leveraged down the road for weaponized applications such as (Chinese) military or surveillance use cases.

It’s a risk that exists according Diane Greene, CEO of Google Cloud. in a June 2018 blog post, she commented:

We … can not control all downstream uses of our [cloud and AI] technology.

On Thursday, Gen. Dunford voiced such concerns, saying that with China, there’s no distinction between civilian, communist, and military uses because (AI) technology will be siphoned off to diverse Chinese interests.

On Thursday, the four-star general said:

In Oct. 2018, thousands of Google employees protested and dozens quit their jobs when the tech giant competed to build the U.S. Defense Department’s cloud-computing infrastructure. The Silicon Valley-based company cited ethical concerns as the primary reason why it dropped out of bidding for the massive $10 billion JEDI project.

Google’s U.S. decision seems more controversial in light of its efforts in China.

In June 2018, the tech giant developed principles for governing AI. It decided that artificial intelligence (built by Google) would not be used for the design or for the deploying of weapons, surveillance, or other tech that would harm people.

It’s a principle that observers say doesn’t apply to Beijing, given Chinese military aggression in South China Sea and its efforts to monitor its population in real-time through a Big Brother-like “social credit” system (China’s social credit system is a 24/7 surveillance network that uses cutting-edge innovation to reward and punish specified behaviors).

In his book “The Hundred-Year Marathon,” author Michael Pillsbury (a China expert and former White House adviser) says that Beijing influences U.S. companies to share (and lose control of) cutting-edge intellectual property by dangling access to China’s huge market. Long-term, it’s an unfair trade-off as American innovation gives rise to a rival that undermines and steals it.

Ventures [such as Google’s AI lab] to help develop artificial intelligence in China are going to do two things. They are going to help an authoritarian government assert control [over] its own population. Again, our country exists for the individual. China exists for the Chinese Communist Party.

America’s top general also said that such ventures can make the U.S. military less competitive vis-à-vis China’s military because of AI’s various applications and non-civilian downstream use. Dunford continued with:

The second thing it’s going to do is enable the Chinese military to take advantage of the technology that is developed in the United States… They [Google] have an artificial intelligence venture in China. I think it is a reasonable assertion… [that it] indirectly benefits the Chinese military and creates a challenge for us to [maintain] a competitive advantage.

The Greek philosopher Aristotle believed that technology was an extension of nature. You could say that AI and machine-learning are becoming an extension of our brain’s 100 trillion neural connections.

Artificial intelligence is the future, not only for Russia, but for all humankind. It comes with colossal opportunities, but also threats that are difficult to predict. Whoever becomes the leader in this sphere will become the ruler of the world.