Back in the day, we used to think that augmented reality was the future. Everything from phone games to the Nintendo 3DS attempted to hop on the AR bandwagon. For a little while, it seemed like the world would soon be entirely overlayed with sci-fi graphics.

We can probably thank Google Glass for ruining that particular dream. Turns out, it’s no good having a groundbreaking piece of technology if it makes you look like a prat.

Well, the dream was somewhat rekindled lately when information about an Apple and Valve AR partnership leaked.

A little while ago, Apple had supposedly stopped production on their AR device. Now, it turns out they’ve shifted their production to another company, reportedly Valve. If true, it means that we might be receiving a piece of AR tech with the design philosophy of Apple and the software resources of Valve.

Apart from being a nerd fantasy, this product could potentially bring wearable AR tech to the masses.

Initially, the device was being designed as primarily an iPhone accessory. While this still may be the case, color me skeptical that things haven’t changed. With Valve on the team, it’s unlikely that this AR tech will just relay screen notifications.

Hardware advancements haven’t been the only major leap forward.

Niantic, creators of Pokemon Go, have been making some pretty huge strides forward in AR software. With their neural network, it is now possible to bring occlusion into the mix. For those not technically inclined, it basically means making stuff disappear when it’s behind something.

Sure, it might not sound amazing, but it’s another step closer to immersive AR: 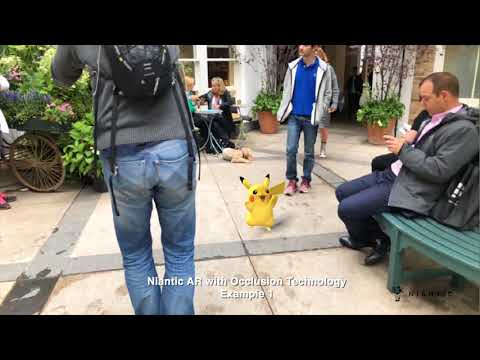 They also showed off their new real-time AR multiplayer gaming, which has some pretty crazy potential all on its own (beyond its inclusion in Pokemon Go).

Imagine wearing AR goggles, meeting up with friends, and being able to play laser tag in your local park. All with hyper-immersive graphics. That alone should be enough to get you excited.

All that we need now is for Apple’s new AR product to come out and not look totally ridiculous, which shouldn’t be too hard considering how much money they have to put into the design.

It would also help if the release of the product helped Google to get over the crippling fear of AR that Google Glass thrust upon them. For now, it seems like wishful thinking, but with so many advances happening in AR right now, it’s hard not to imagine the possibilities.