The Dow Jones dipped from its highs after President Donald Trump spooked the stock market with one of his most bombastic Twitter threats ever, warning that he could “totally destroy and obliterate” the economy of Turkey.

These losses were mitigated as Apple stock exploded higher as demand for the iPhone 11 remains strong, alongside hopes remaining high for some progress in the trade war when talks restart this week.

Putting Trump’s Turkish comments in context, the president announced that the US would be withdrawing from Syria. This leaves their former allies, the Kurds, exposed in Northern Syria to a Turkish government that believes they are terrorists.

….the captured ISIS fighters and families. The U.S. has done far more than anyone could have ever expected, including the capture of 100% of the ISIS Caliphate. It is time now for others in the region, some of great wealth, to protect their own territory. THE USA IS GREAT!

European stock markets ignored a breakdown in Brexit talks to rally, even though the October 31st deadline is rapidly approaching.

Of course, there was far more than just Turkey-related angst weighing on the Dow. Investors also woke up to the news that China was planning to limit the scope of trade talks with the US significantly.

A good portion of the rally on Friday was predicated on hopes of progress on trade, and the weakness in the Australian dollar today (-0.5%) indicated there was a good deal of trade war concern.

The continued belief that some deescalation in the form of a minor trade deal could occur is helping support markets, even if a trade war truce is unlikely.

Larry Kudlow may have helped stocks by stating that the rumored proposal to delist Chinese companies from US stock exchanges that roiled the Dow was “not on the table.” 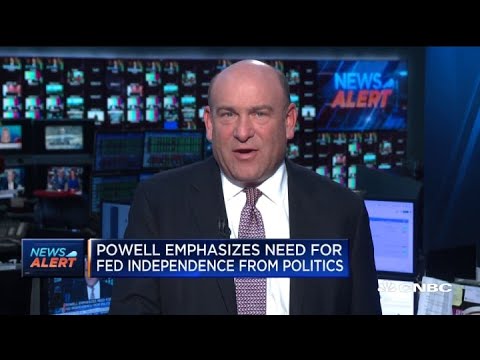 Speaking only briefly, Federal Reserve Chairman Jerome Powell took to the stand to stress the importance of an independent Federal Reserve. This is a hot topic given President Trump’s sustained attacks on Powell’s approach to monetary policy.

September’s FOMC minutes are expected later this week. with investors pricing in an overwhelming probability of a third straight rate cut at the Fed’s upcoming policy at the end of October.

Economist Morten Lund at Nordea believes that the current economic conditions in the United States warrant two more cuts from the Fed. This strategy could maintain growth conditions, though there is no guarantee it will help the US avoid a recession, as he stated in a report:

“We believe the current cycle is comparable with the mid-90s when after a cumulative 300 bp of rate hikes, the Fed cut rates by 75 bp and managed to fend off a recession. This time, the Fed has hiked by a cumulative 225 bp plus delivered additional tightening via the normalization of the balance sheet. Acting pre-emptively with two more cuts in October and December could prevent a recession and extend the current expansion. We do, however, still expect the US economy to slow further from here, with the risk of a recession being non-negligible.”

Dow Stocks: Apple Puts Stock Market on Its Back

A quiet Dow 30 avoided steeper losses because a relatively strong rally in major DJIA component Apple (+0.3%) buttressed the market. Cisco, Disney, and the beleaguered UnitedHealth Group were also up more than 0.6% on the day.

There were plenty of stocks in the red; Exxon Mobil fell 1%, and Coca-Cola led the losers with a 1.3% decline.