Luka Doncic and the Dallas Mavericks are blowing past everyone’s preseason expectations. They’re second in the league in point differential, trailing only the juggernauts in Milwaukee. Luka Doncic and Kristaps Porzingis are proving to be a top duo in the league. And ever since Luka went down with an ankle injury, the Mavericks are showing they’re much more than their main superstar.

Toronto won 59 games in 2017-18 without a bonafide superstar. Then, after getting swept by LeBron in the playoffs, they decided to go all-in and add Kawhi Leonard. At the same time, homegrown talent like Pascal Siakam took steps towards stardom, with Siakam becoming the league’s Most Improved Player.

The Mavericks have essentially added two superstars this offseason. The Unicorn, Kristaps Porzingis, came over in lopsided swap with the New York Knicks this summer.

Porzingis and the Mavs have the Bucks on the ropes. (via @nbatv) pic.twitter.com/l9YbJ3qVKt

Luka Doncic, while already on the team last year, has taken the superstar leap. His player efficiency rating (PER) has skyrocketed from 19.6 to a historic 31.8 this year. He’s scoring, rebounding, assisting, and stealing at a higher clip while shooting better from everywhere on the floor. And his progress has translated to wins.

The Mavericks are on track for 53 wins, a 20-win improvement on last year. But since Luka went down with an ankle injury, Dallas is showing they’re much more than just their superstar.

Both Teams Look Great Without Their Best Player

The Raptors shocked the league last year by going 17-5 when their best player, Kawhi Leonard, missed games. At first, it was head-scratching, then people started realizing that no-name players like Siakam and Fred VanVleet might actually be really good. 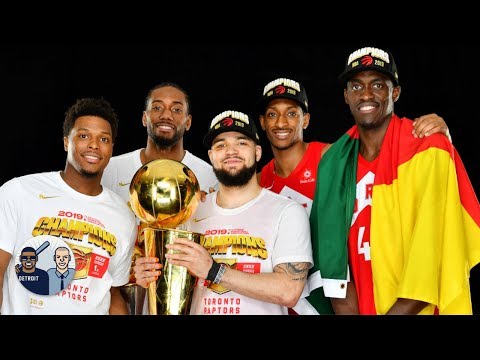 Dallas has a similarly talented group. Without Luka Doncic, the Mavericks have beaten elite teams like the Bucks and the 76ers on the road. They’ve lost close games against playoff-locks Miami, Boston, and Toronto by a total of 13 points. They’ve been stellar without their best player, just like last year’s Raptors.

Both Teams Have Excellent Coaching and Depth

While Nick Nurse came out of nowhere last year and established himself as a top-tier NBA coach, the Mavericks’ Rick Carlisle has been fantastic for years. He led Dallas to the title in 2011, and even when the Mavericks had lackluster rosters, Carlisle got the best from them.

Now, he finally has a roster with stars and depth again. Players like Jalen Brunson have stepped up in ways reminiscent of Fred VanVleet last year. Size concerns caused VanVleet to go undrafted in 2016. Since then, he’s become one of Toronto’s most indispensable players.

Meanwhile, the Mavs scooped up the undersized Brunson in the second round of the 2018 draft. Since Luka went down, Brunson has been stellar. Over the last five games, he’s averaged 14.6 points and 9.2 assists.

He’s not alone. Players like Tim Hardaway Jr. and Seth Curry have scored in bunches to keep the Mavericks afloat. Role players like Dwight Powell, Dorian Finney-Smith, Maxi Kleber, and Delon Wright have played their parts to perfection.

Luka and the Mavs Still Lack One Thing

The one thing last year’s Raptors had that the Mavericks don’t is a plethora of playoff-tested veterans. JJ Barea won the title with the Mavs in 2011, and he’s the only active player on the roster who’s been through deep playoff runs. The Raptors had already been through playoff battles before adding title winners Leonard and Danny Green. A mid-season trade netted them the godfather of Grit N’ Grind, Marc Gasol.

The Mavericks are rumored to be shopping for Finals MVP Andre Iguodala. If they can land a veteran of his caliber, Dallas, just like last year’s Raptors, will be in title contention much sooner than expected.