It seems John Oliver is back.

After three months away, the British “comic” had a few things he wanted to get off his chest — notably the acquittal of U.S. President Donald Trump.

Oliver usually makes for car crash television, and his big return did not disappoint.

John Oliver is a World-Class Panderer

Before we look at what John Oliver said about Trump and the impeachment process, it’s essential to bear in mind Oliver’s audience.

As unfunny as his comedy is, he’s a smart man when it comes to keeping his audience onside and coddling their fragile little beliefs.

His entire schtick revolves around massaging the many egos that exist within the liberal bubble. His job is to confirm that his liberal followers are right, and everyone else is wrong.

He does this in the smug, sarcastic manner that appeals so much to the left. In John Oliver, U.S. liberals see the person they wish they could be.

Of course he hasn’t learned his lesson! Trump never learns his lesson! This is a man whose first-born child was Donald Trump Jr., and he kept having children!

In a week where we’ve seen Dean Cain blasted by liberals for mocking the appearance of Ashley Judd (even though he clearly didn’t), John Oliver cracks a joke at the expense of President Trump’s family and goes mostly unchallenged.

After all, it’s not just Trump himself who’s fair game for liberals, it’s his entire family.

Can you imagine if someone like Sean Hannity attacked Elizabeth Warren’s family? There would be absolute mayhem.

Without Donald Trump, There is No John Oliver

Does anyone recall that time John Oliver pledged that his show wouldn’t be all about Trump?

I think we’re very anxious to not make it all Trump, all the time — both on a level of interest and on a level of what the human soul can sustain.

How long did that last?

Without Donald Trump, John Oliver is just another unfunny British comedian. He should be thanking Trump for his success in the U.S.

Not only has Trump helped make John Oliver a wealthy man, but he also inadvertently helped Oliver dodge taxes on his $9.5 million Manhattan penthouse. Trump’s tax loophole from the 1970s was put to good use by John Oliver and his wife. 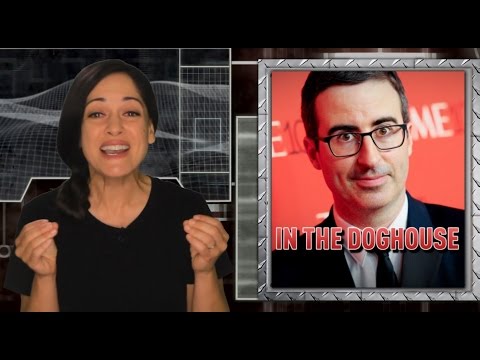 John Oliver is riding a wave and good for him. His audience is wrapped around his finger.

What cannot be argued, however, is that without Donald Trump, that audience isn’t nearly as responsive. His appeal would deflate without a bogeyman to bash.

Trump did learn a lesson from his impeachment trial; specifically, “I can get away with anything because nobody will hold me accountable.”

At this point, the most entertaining thing Oliver could do is hold himself accountable.