Federal Reserve interest rate cuts have helped stabilize a stock market weighed down by the trade war, but rising dissension within the US central bank suggests the Dow’s next leg up might need a new catalyst.

On Wednesday, Chicago Fed President Charles Evans said that although the US economy faces “some risk,” his “own assessment is pretty much in line” with the Fed’s most recent consensus forecast, which called for no additional interest rate cuts in 2019 or 2020.

“I think policy probably is in a good place right now. All told, the growth outlook is good, and we have policy accommodation in place to support rising inflation,” Evans said in a speech in Illinois. 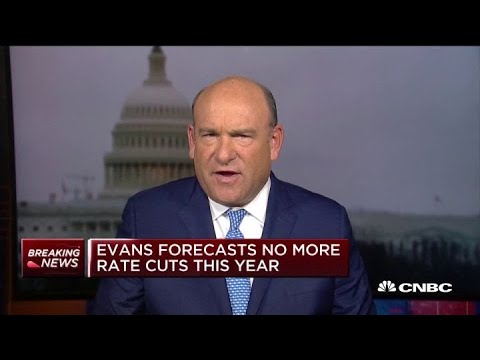 The other dissenter was James Bullard, who campaigned for a 50 basis point cut. The St. Louis Fed president said this week that he would be comfortable slashing rates all the way to zero (though not into negative territory), alleging that global trade tensions had opened a “Pandora’s box” that could roil markets for years.

Evans’ speech did little to change the market’s outlook for the October FOMC meeting.

According to CME’s FedWatch tool, fed funds futures imply a 90.3% probability of a 25 basis point rate cut that would bring the central bank’s target range to 1.5% to 1.75%. The odds of a rate cut actually rose more than 15% on Wednesday, as a surprise slump in retail sales heightened concerns about the state of the economy.

Nevertheless, Evans’ departure from the Fed’s dovish contingent might signal that the bank’s appetite for stimulus is waning.

That could be bad news for investors counting on Fed easing to provide the stock market with fuel. David Brown, the chief executive of New View Economics, wrote this week that the Fed should, at a minimum, target a near-zero interest rate.

“The Fed needs to cut interest rates from around 2 per cent to closer to zero while, at the same time, cranking up its QE stockpile back towards its earlier US$4.2 trillion peak, reversing its recent rundown of bond holdings to US$3.6 trillion,” Brown wrote.

Three Rate Cuts & Then the Fed’s Out?

However, the market’s not confident the Fed will take Brown’s dovish advice.

Assuming the October FOMC meeting produces an interest rate cut, fed funds futures imply just a 21.1% probability of a fourth straight rate reduction when the FOMC reconvenes in December. That’s a steep decline from last week, when those odds ranged in the mid-40s.

Nor does the market currently expect further interest rate cuts following the FOMC meetings in January or March, though there’s a 52.6% chance rates slide to a target range of 1% to 1.25% by April 2020.