The Dow failed to extend its monster rally on Wednesday as Wall Street wrestled with another batch of disappointing economic data and Beijing ripped into the US government for its “sinister intention to destroy Hong Kong.”

Meanwhile, President Donald Trump unleashed his evaluation of the state of Democratic electoral politics, warning that if any of those “clowns” won the 2020 election, they would steer the economy toward a stock market crash on par with the one that ushered in the Great Depression.

The Dow and its peers surged on Tuesday in response to blowout earnings, but the euphoria fizzled out this morning after the Commerce Department revealed that retail sales had recorded their first decline in seven months.

Retail sales dipped 0.3% in September, missing the analyst estimate of a 0.3% increase by a wide margin. Core retail sales also fell, declining 0.1% versus the consensus forecast of 0.2% growth.

The disappointing retail sales data adds to fears that a weak manufacturing sector has pulled the entire US economy to the brink of a recession. Considering that new tariffs on Chinese-produced consumer goods are scheduled to take effect on Dec. 15, US retail sales might struggle to shake off the present slump.

However, investors might take comfort in the belief that this weak economic data will persuade the Federal Reserve to continue cutting interest rates. At present, fed funds futures imply a roughly 90% probability of a 25 basis point cut at this month’s FOMC meeting, which would reduce the Fed’s target rate to 1.5% to 1.75%.

China Rebukes US Congress over ‘Sinister’ Support for Hong Kong

Also weighing on the stock market is the ongoing Hong Kong protest movement, which complicates already-tense trade negotiations between Washington and Beijing.

On Wednesday, the South China Morning Post reported that Chinese officials had issued a sharp rebuke to the US House of Representatives over its support for the Hong Kong Human Rights and Democracy Act of 2019, which authorizes the government to periodically review and evaluate Hong Kong’s status as a semi-autonomous Chinese region. 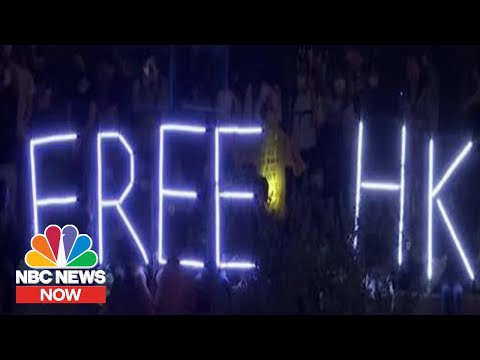 China’s foreign ministry said that the bill – which must still pass the Senate and receive President Trump’s signature before it goes into law – betrayed the United States’ “sinister intentions to destroy Hong Kong’s prosperity and stability.”

Foreign ministry spokesman Geng Shuang warned that if the bill does become law, it would harm US-China relations – and presumably lead to trade war escalations.

“If the relevant bill is ultimately passed into law, not only will it harm Chinese interests but it will damage China-US relations and seriously damage the US’ own interests,” Geng said.

Trump: Democratic Victory in 2020 Would Cause Stock Market Crash

This morning, Trump – who hopes to win a second presidential term in the 2020 election – warned that any of the Democratic hopefuls on last night’s debate stage would, if they became president, cause the Dow Jones and its fellow indices to implode.

“Our record Economy would CRASH, just like in 1929, if any of those clowns became President!”

Our record Economy would CRASH, just like in 1929, if any of those clowns became President!

While clearly hyperbolic, many Wall Street analysts agree that a Trump presidency is more favorable to the stock market than a Democratic White House administration. Mobius Capital Partners founder Mark Mobius said earlier this year that the stock market would go “haywire” if Trump loses in 2020. Just this morning, billionaire hedge fund manager Leon Cooperman told CNBC that the market would plunge 25% if Elizabeth Warren – who has edged ahead of longtime frontrunner Joe Biden in several recent polls – becomes president.

According to modeling from Moody’s Analytics, Trump should be able to ride the US economy’s longest-ever expansion to a comfortable victory in 2020.

“If the economy a year from now is the same as it is today, or roughly so, then the power of incumbency is strong and Trump’s election odds are very good, particularly if Democrats aren’t enthusiastic and don’t get out to vote,” said Mark Zandi, chief economist at Moody’s Analytics.

The Moody’s model, which assumes that voters choose presidential candidates based primarily on financial considerations, has accurately predicted every election since 1980, except for one.