The U.S. stock market just closed its best month in 33 years, but the Dow Jones Industrial Average (DJIA) is poised to suffer its second straight painful loss during the first trading day of May.

The seeds of today’s downturn can be found in Amazon’s stunningly poor earnings release, which included an ominous warning from CEO Jeff Bezos:

“If you’re a shareowner in Amazon, you may want to take a seat,” Bezos said. “Under normal circumstances, in this coming Q2, we’d expect to make some $4 billion or more in operating profit. But these aren’t normal circumstances. Instead, we expect to spend the entirety of that $4 billion, and perhaps a bit more, on COVID-related expenses.”

The chilling revelation blindsided Wall Street, which had watched Amazon stock surge more than 33% in 2020 and hit new all-time highs even as coronavirus rocked the U.S. economy.

Because if there was one company that was uniquely positioned to turn a tantalizing profit during the pandemic, it was Amazon – right?

What investors failed to realize was that all this revenue growth comes at an extraordinary cost as Amazon works to protect its employees from COVID-19. And as the odds of a V-shaped recovery grow slimmer by the day, those costs could swallow AMZN’s profit outlook.

But this isn’t just a problem for Amazon shareholders. Because if Amazon isn’t immune to coronavirus, what does that say about the rest of the stock market?

That’s the question Dow Jones bulls must wrestle with, and if today’s price action is any indication, the answer isn’t a good one.

To make matters worse, Treasury yields fell overnight, indicating that investors are seeking safe harbor in government bonds despite interest rates that offer minimal returns. The yield on the benchmark 10-year Treasury note dipped as low as 0.59% before recovering to 0.629% as of this article’s most recent update.

Six Stocks Drove the Stock Market to Its Best Rally in 33 Years – What Happens Next? 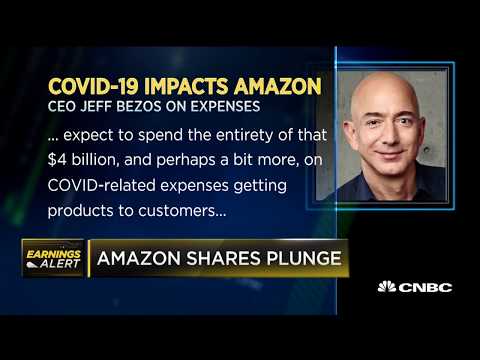 That’s a warning sign for the broader stock market recovery, which has relied heavily on a handful of mega-cap names to push major indices higher. In fact, the recovery has been so lopsided that just six stocks – all tech companies – now make up nearly 25% of the entire S&P 500.

Those names also happen to be the biggest stocks in the Nasdaq, which has outperformed the Dow and S&P 500 by a considerable margin since the pandemic threw the stock market into disarray.

Investors viewed these mega-cap stocks as the safest way to chase growth as the market shifted into recovery mode. Even if the economic devastation proved to be worse than anticipated, they possessed the heft to weather a storm that smaller companies couldn’t.

Smaller cap stocks finally began to catch up during the final trading days of April, which many analysts said was a bullish sign for the health of the entire market’s recovery – including the blue-chip Dow Jones.

But if the coronavirus pandemic plagues the world for another two years, as a new report warns it will, and not even Amazon can turn a profit in this environment without putting its employees at risk, what happens to the overleveraged corporations that make up the Russell 2000?

For that matter, what will happen to Amazon and the other five stocks that make up a quarter of the S&P 500 (and a growing percentage of the Dow Jones too)? Will they continue to plow higher, gobbling up bigger and bigger portions of the market cap-weighted index while smaller firms struggle?

Or, just as they led the march to the stock market’s best month in three decades, will they headline the retreat?