Fresh off the announcement during the PlayStation State of Play broadcast last week that Death Stranding is getting the PlayStation 4 limited edition treatment, Hideo Kojima has revealed that the game’s iconic tanked Bridge Baby (BB) would emit sounds through the bundle’s exclusive translucent off-yellow Dual Shock 4 controller.

By setting, you’ll be able to have BB’s voice coming out from this BBish controller👍🌈🦀☔️🐟🐋🐬💀👶✋🤩 pic.twitter.com/BzBRI4Oyxb

Audio coming from the PlayStation 4 isn’t exactly a novel feature as many previous titles have made use of the gimmick to enhance the gaming experience, but in true Kojima style, Death Stranding will emit the Bridge baby’s disquieting whimpers and cries.

A creepy formula if you ask us and one that is sure to unnerve a few especially during those late-night marathon sessions in the days following Death Stranding’s launch on Nov. 8.

It’s rather fitting though given that we’ll have to use the motion sensors in the controller to soothe the BB when they get upset or when Sam tumbles off a cliff edge as we saw in the Gamescom demo back in August.

As is routine for these types of audio embellishments, you’ll be able to turn off the feature within the Death Stranding settings menu if it all gets a bit too much. 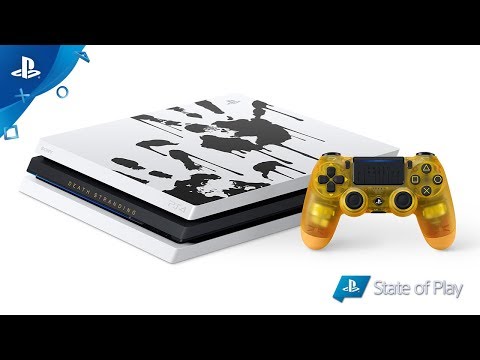 Aside from the eerie murmurs, the controller is an oddity in itself. Transparent to reveal the electrical innards of the DualShock 4, the shell mimics the amber synthetic amniotic fluid of BB’s tank strapped to protagonist Sam’s chest.

In what seems like a missed opportunity, BB isn’t in the controller, and we won’t be able to look down at their bulging eyes peering back at us while we play, which would have racked up the weird even more.

As for the bundled console, Sony is throwing in a 1TB PlayStation 4 Pro sporting the weeping tar-like hand prints of Death Stranding’s murderous BT’s with the world’s continents etched into the palms.

Well, there you go. Another quirk from Death Stranding and we can’t say we’re all that surprised by this point.