A Boeing plane was involved in another grisly crash on Wednesday, injuring at least 120 people and potentially rekindling safety fears that have plagued the beleaguered company’s stock price.

The 11-year-old Boeing 737 was carrying 177 passengers and crewmembers on a Pegasus Airlines flight from the Turkish city of Izmir when it skidded off the runway during its landing at Istanbul’s Sabiha Gokcen airport. 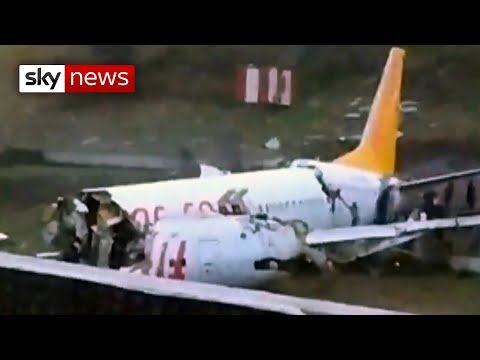 The plane caught fire and then broke into at least three pieces, leaving wreckage strewn across a nearby field.

Remarkably, no fatalities have been reported, although AP reports that the two pilots are in “serious” condition.

Boeing stock appears to be brushing off the crash, which Turkey’s Transportation Ministry attributed to a “rough landing” during poor flight conditions rather than any known technical issue with the aircraft.

BA shares edged off their session highs as reports of the 737 crash spread, but the stock is still up more than 3% on the day amid a broad rally in the Dow Jones Industrial Average (+1.43%).

That could change if new details about the crash emerge that contradict the official preliminary narrative.

Earlier this week, a Boeing 767 operated by Air Canada was forced to make an emergency landing in Madrid after encountering engine issues. That caused a temporary pullback in BA shares as jittery shareholders reacted to the negative headlines.

Safety concerns continue to haunt the United States’ largest aerospace company nearly a year after two deadly crashes led to worldwide groundings of its flagship 737 MAX, which has yet to return to service.

Boeing stock is down nearly 2% year to date.