But just because Brees finds himself at the top of another list riddled with all-time great quarterbacks doesn’t mean he’ll be there for long. Tom Brady is just three touchdown tosses behind his longtime counterpart’s total and, like Brees, has no plans to hang it up.

The New England Patriots legend has already set his sights on breaking Brees’ mark, too.

But unfortunately for Brady, his chances of catching up to Brees have been rendered increasingly slim as the 2019 season has unfolded.

Brees, like Brady, is well into the twilight of his career. He turns 41 in mid-January, when the Saints plan on staking their claim as the NFC’s best team en route to their first Super Bowl berth since they raised the Vince Lombardi Trophy in 2009.

And just like Brady, Brees has given no indication retirement is imminent. After returning from a six-week layoff earlier this season to rehab a fractured thumb, he made abundantly clear that his fleeting taste of life without football didn’t sit well.

But unlike Brady, Brees has shown no signs of slowing down as his career nears its third decade. He finished second in MVP voting to Patrick Mahomes last season and has been downright dominant since coming back from a five-game absence on Oct. 27, throwing for 19 touchdowns and two interceptions over the last seven weeks.

Brees’ most impressive accomplishment on Monday night, in fact, had nothing to do with his chart-topping touchdown throws. He also set a record for single-game completion percentage, connecting with his target on all but one of his 30 attempts. 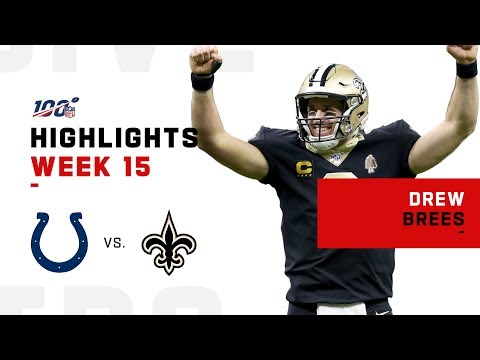 Brees’ career is bound to end relatively soon. But as he’s continued proving on a weekly basis this season, it likely won’t be because his level of play has tailed off significantly since his prime.

The same certainly can’t be said of Brady.

Signs of decline were there throughout last season, when he posted his highest interception rate since 2011 and lowest yards per attempt since 2013. They’ve been far more evident in 2019, too, as the Patriots have struggled to find reliable pass-catching weapons following the offseason departures of longtime stalwarts Rob Gronkowski and Danny Amendola.

Brady ranks 20th in QBR, 23rd in touchdown percentage, and 27th in yards per attempt. He’s also been especially ineffective of late, as New England’s clear offensive deficiencies have chipped away at their status as prohibitive Super Bowl favorites in the AFC.

The possibility exists that Brady’s struggles prove a blip. He’s always at his best in the postseason, and the Patriots will surely prioritize help at receiver in the offseason. Even at 42, Brady has maintained he’s yet to even come up with a potential timeline toward retirement. But all the evidence points to Father Time finally catching up to him, with Brees better staving off that inevitability.

Don’t count on Brees’ new record being broken any time soon, basically. He’s simply in a different class than Brady at this advanced stage of their Hall-of-Fame careers.