Instead of playing on the earliest possible date of his return to action, though, the New Orleans Pelicans rookie was nowhere to be found 24 hours later as his team fell to the Dallas Mavericks. Shortly thereafter came word from ESPN that New Orleans would remain “overly cautious” with Williamson, cementing the likelihood his first NBA action would come after the prescribed six-to-eight week timeline.

The news comes as a blow for not just the struggling Pelicans but a league that’s suddenly and unexpectedly struggled to reach past ratings benchmarks in the season’s early going. For both Williamson and his team, though, the prudence guiding New Orleans’ caution is indeed the correct priority.

The Oct. 21 announcement of Williamson’s surgery to repair a torn meniscus wasn’t all bad. He’d avoided the season-ending injury the Pelicans feared, at least, and the two-month maximum placed on his return to action made it seem likely he’d play on Christmas against the Denver Nuggets.

But the latest intel suggests it’s a pipe dream the No. 1 overall pick will appear in the nightcap of the league’s marquee slate of games on Dec. 25. Turner Sports’ Kristen Ledlow reported on Tuesday that though Williamson has ramped up activities in preparation for his debut, it will “definitely” come outside the initially determined timeline.

As I reported on @NBAonTNT, Zion Williamson “turned a corner” this week. However, the team is erring on the side of caution and his return will “definitely” come outside of the 6-8 week window initially projected. #NOPvsDAL

It’s not surprising that Williamson won’t be ready to play by Christmas. There will be plenty of intrigue in matchups between the Los Angeles Lakers and LA Clippers, Boston Celtics and Toronto Raptors, and Milwaukee Bucks and Philadelphia 76ers for the hordes of fans who first tune into the league while engaging in holiday cheer.

But Williamson’s confirmed absence is disappointing nonetheless and serves as a major missed opportunity for a league in dire need of a cross-cultural ratings draw.

New Orleans has been ravaged by injuries all season long. Not a single player on the roster has played in each of the team’s 20 games, while only four players – all of them reserves, naturally – have made it through the first six weeks of 2019-20 without suffering a health malady.

Considering the problematically fluid nature of Alvin Gentry’s playing rotation, it’s a minor miracle New Orleans is just four games out of the Western Conference’s eighth and final playoff spot. But that’s actually more indicative of the West’s unexpectedly weak middle class as it is the Pelicans over-performing.

STORY: The Pelicans have serious problems and Zion Williamson won’t be enough to solve them https://t.co/X8xkp0596x

They’re just 6-15, with the league’s sixth-worst net rating, and Basketball Reference gives them a 4.9 percent chance of making the playoffs. Will all those numbers improve once Williamson debuts? That seems inevitable given his historic performance in the preseason, but the damage will very likely be too much to overcome by the time he takes the floor. 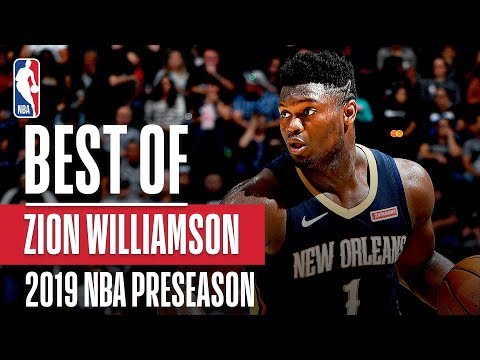 Even before Williamson tore his meniscus, his rookie season was never most about the present. Everything the Pelicans were set to do in 2019-20 was at least with one eye looking toward the future.

Williamson’s injury, in many ways, simplified things for New Orleans. Gentry could concentrate on putting a winning product on the floor without worrying about his franchise player’s development, and the Pelicans could do everything in their power to ensure Williamson is completely healthy and pain free before stepping on the court.

It’s a shame Williamson won’t play on Christmas – for New Orleans, for the league, for fans across the globe. But by steadfastly prioritizing the long-term future, the Pelicans are putting Williamson’s best interest first. And luckily, it just happens to be the best interest of New Orleans and the NBA at large, too.