Almost all takeaways gleaned from preseason NBA basketball deserve an asterisk. The most common exceptions? Players showing flashes of anticipated improvement, and more instructive as it relates to the regular season, confirming prevailing assumptions.

The most productive and eye-popping performances of the preseason so far have come from Zion Williamson and Stephen Curry. The New Orleans Pelicans rookie dropped 29 points on 12-of-13 against the Chicago Bulls on Wednesday, while the Golden State Warriors franchise player reverted back to his alpha dog roots 24 hours later, erupting for 40 points on 19 shots versus the Minnesota Timberwolves.

It’s notable any time a player misfires just once while taking 10 or more shots. The same is true when a high-usage player averages more than two points per field goal attempt in a game. But reactions to the play of Williamson and Curry have nevertheless been overzealous, keen examples of websites and talking heads prioritizing traffic and attention over thoughtful analysis.

Williamson was downright dominant against the Bulls, who were helpless to contain his blend of explosiveness, burst, and strength in the paint. That development shouldn’t have been surprising, or even especially noteworthy. The league has never seen an athlete quite like Williamson, and Chicago doesn’t have the rim-protection needed to exploit his lack of positional length. The result, basically, served as a replay of what we saw from Williamson during his historic freshman season at Duke. 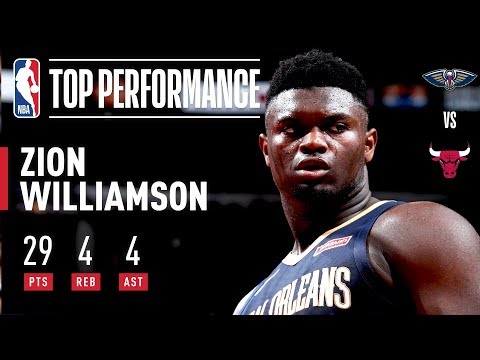 But nobody has ever questioned Williamson’s superlative ability as a half-court and transition finisher. What will go much further to deciding his level of effectiveness this season and in the future is his development as a primary ball-handler and threatening perimeter shooter, possibilities that seemed years away against Chicago.

The film reveals that Williamson was assisted on all but one of his 12 baskets. Half of his scores came in transition, and none outside the paint. In fact, Williamson didn’t attempt a single shot from beyond eight feet.

But don’t tell that to the punditry, nor allow for the preseason environment to temper expectations. ESPN’s Stephen A. Smith is adamant Williamson’s rookie season will be reminiscent of Shaquille O’Neal‘s, insisting “most” of Williamson’s buckets will be dunks.

I think Zion's rookie year will be very similar to SHAQ's! pic.twitter.com/Bx1Bm7AS3N

FOX Sports’ Nick Wright fawned over Williamson shooting 12-of-13, failing to mention that each score was in the paint, all but one of which after he caught a pass on the move from a teammate.

"Zion had 29 points, didn't play in the 4th. Zion had 29 points, and was 12 of 13. He's immediately going to be a fringe All-Star caliber player. If he was in the East, I think he would be an All-Star his rookie year." — @getnickwright pic.twitter.com/JdeKwiXtJZ

Opponents will defend Williamson much differently during the regular season, and most will be better suited to make life more difficult on him around the rim than Chicago. But in defense of those overreacting to Williamson’s play, at least we’d never seen him be so productive against NBA competition.

This Is Precisely What We Expected from Stephen Curry

That’s not the case with Stephen Curry, one of the three best players in the world who’s already “ruined the game” with his surreal shot-making prowess from all over the floor. With Kevin Durant long gone and Klay Thompson recovering from a torn ACL, the broad expectation is that Curry will pick up this season where he left off in 2015-16, when he became the first unanimous MVP in league history.

His play on Thursday was mere confirmation of that likelihood, but the collective response of the basketball world made it seem something new. The Ringer published an article on Curry’s performance titled “The Six Degrees of Steph Curry Hype, Illustrated by His 40-Point Outburst,” while SBNation went with “Stephen Curry is warning the NBA this is his year without Kevin Durant.”

Did we suddenly forget that this is exactly what we all expected from Curry in 2019-20?

There’s nothing wrong with being excited by two of the game’s most unique stars living up to that billing, even during exhibition play.

But until Zion Williamson does much more than explode for thunderous, acrobatic finishes and Stephen Curry plays like his former, supernova self when locked-in defenses are geared to stop him, it’s prudent to take each of their performances with a preseason grain of salt.