Patrick Beverley’s game-saving block on LeBron James in the game’s final seconds is what will be remembered most from the LA Clippers’ comeback victory over the Los Angeles Lakers. But it was an earlier exchange between them on Christmas Day that looms far larger to the Lakers’ title hopes – and serves as a reminder of just how tenuous they really are.

Early in the first quarter, James rotated from the weak side to take a charge on a driving Beverley. Their forceful collision left James in a heap on the floor, grabbing his groin in pain. What seemed in the moment a like fleeting case of crotch-related pain, though, James indicated after the game was far more serious.

Lakers’ LeBron James: “I felt healthy going into the game. The second or third defensive possession, I got kneed in the groin taking a charge from Pat Beverley. That kind of sent me back to where I was five days ago.” pic.twitter.com/KHWoCjyMZQ

James’ groin injury isn’t just a re-aggravation of the one that kept him out of the Lakers’ loss to the Denver Nuggets on Dec. 23. It’s also the second injury to that part of his body suffered on Christmas in successive years.

Fortunately, the injury James incurred on Wednesday is on the right side of his groin and reportedly “far less dire” than the malady that last season sidelined him for the longest stretch of his career. 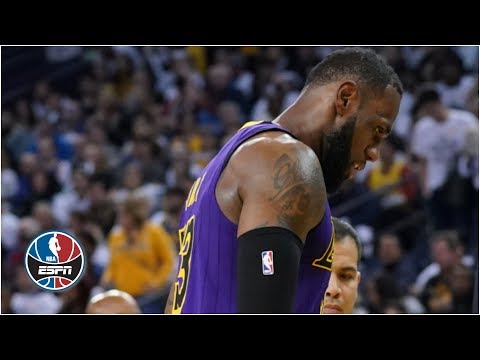 Los Angeles was 20-14 when he went down last Christmas. By the time he returned five weeks later, the Lakers were 26-25 and had tumbled from fourth to ninth in the Western Conference. They only fell further down the standings from there, leading James to shut his season down prematurely.

Los Angeles is much better this season. Anthony Davis ensures that all by himself, and Frank Vogel’s team can win with defensive intensity and veteran guile.

But James is still an indispensable piece to the Lakers’ puzzle. They score nearly 11 fewer points per 100 possessions when he’s on the bench, an easy team-high. Lineups featuring Davis without James have a 102.3 offensive rating, lower than the Chicago Bulls’ league-worst mark.

The Clippers Aren’t An Anomaly

Obviously, Los Angeles needs James to win at its highest level. But when this team needs him most isn’t in late December or early January. Most important is James being as healthy as possible in April, May, and June.

That’s an imperative for every marquee player and team. The Milwaukee Bucks’ title dreams will vanish if Giannis Antetokounmpo is hobbled come spring, and the same is true of the Philadelphia 76ers and Joel Embiid. James is in his mid-thirties, though, and the Lakers’ steepest competition for a title is uniquely suited to defend him.

Some of James’ scoring struggles on Wednesday can certainly be attributed to waning mobility as a result of his injury. But a lot of his labors on Christmas mirrored those from the season-opener, when the Clippers’ arsenal of wing defenders and switch-heavy scheme limited his effectiveness at the rim.

James averages 8.5 field goal attempts per game from the restricted area this season, shooting 67.1 percent – elite numbers. He took just four such shots on Christmas and went 4-of-8 from there in the season opener.

The Bucks and Sixers don’t have as many viable wing defenders as the Clippers, but their sheer size and length are game-changing nonetheless.

Even nearing his 35th birthday, James’ imminent physical advantages are a driving force of his prowess. They aren’t nearly as readily available against the league’s other top-tier contenders, though, which is all the more reason for the Lakers to approach his nagging groin injury with extreme caution.

Early signs suggest they’re prepared to do just that. But as much as James has stressed a desire to be on the court this season, the most prudent course of action is for Los Angeles to sit him until he’s completely pain-free.

The Lakers’ title hopes depend on it.