The Dallas Mavericks know they got someone special in last season’s Rookie of the Year, Luka Doncic.

He proved it again last month when he had a November to remember. With 32.4 PPG, 10.3 RPG, and 10.4 APG, the 20-year old, second-year pro averaged a triple-double for the entire month.

Before he’s even old enough to grab a drink with his Mavericks teammates, Doncic is taking his place among the NBA’s best. He is just the third player in NBA history to average a triple-double for an entire calendar month. Russell Westbrook and Oscar Robertson are the other two.

So what is Doncic going to do for an encore? The season is not even a quarter of the way complete. If that becomes the highlight of his year, the outlook for the Mavericks may still be okay—but not great.

But it doesn’t look like he is going to rest on his laurels anytime soon.

We've seen a lot of big games this season from Luka, but it means a little more to play well against your idol.@luka7doncic | #MFFL pic.twitter.com/nELTEfKZQ3

Luka Doncic vs. LeBron James and the Mighty Lakers

After proving that he is a force to be reckoned with himself last month, he faced off against the most dominant force in the NBA Sunday—LeBron James and the Los Angeles Lakers. 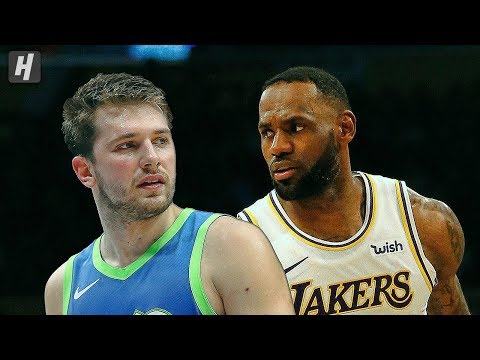 He didn’t go up against James on every possession, but he did square off with him and Anthony Davis several times during the game. While he did admit after the game to being a little nervous playing against his idol, you wouldn’t have known it with how he played.

Well—at least in the second half; the first was kind of ugly for him (he hit just two-of-nine shot attempts). He did fine after halftime, though, scoring 21 points, including 16 in the third quarter alone.

Another triple-double wasn’t in the cards for him (27 points, ten assists, and nine rebounds). But he did lead the Mavericks to a 114-100 win over the Lakers, ending their ten-game winning streak.

Doncic had this to say after the game, via ESPN:

It’s a great win that means a lot to us. It shows that we can play against big teams, too. We just need to keep it rolling.

What’s Next for the Budding Mavericks Superstar?

The Mavericks can only hope that the current trend continues and Doncic keeps improving with each game he plays. Many of his numbers are better than they were during his rookie year.

As the team’s chemistry continues to grow alongside his game, the possibilities for the Mavericks this season are endless.

Dallas has Monday off. They’ll face the Pelicans in New Orleans Tuesday night.