Luka Doncic isn't just putting together the best season of any 20-year-old in NBA history but could be the youngest MVP winner ever, too. | Credit: AP/Richard W. Rodriguez

Luka Doncic exploded for 42 points, 11 rebounds, and 12 assists on Monday night, leading the Dallas Mavericks to a hard-fought victory over the in-state rival San Antonio Spurs. The historical context behind those eye-popping numbers makes Doncic’s performance all the more noteworthy, too.

The Slovenian sensation has often been compared to LeBron James since entering the league last year and even during his star-turning career in Europe as a teenager. But less than a month into his second NBA season, it’s fair to suggest that Doncic is a bit further along in his overall development than James was at the same stage.

Case in point: James, 20, finished seventh in MVP voting in 2004-05. Fourteen years later, Doncic is staking a more forceful claim for basketball’s top individual honor than not just James but any 20-year-old in league history.

It’s almost impossible to believe now that some harbored doubts about Doncic’s growth potential leading up to the 2018 draft. A smaller minority remained pessimistic even after a debut campaign for which he won Rookie of the Year; he joined Hall-of-Famer Oscar Robertson as the only first-year players to ever average at least 20 points, seven rebounds, and six assists per game.

Doncic has thus far cast any skepticism about his ability to improve aside. Noticeably lighter and quicker, he’s already playing at a level reserved for legends. Doncic is averaging 29.5 points, 10.7 rebounds, and 9.3 assists, propelling the 8-5 Mavericks to the league’s second-ranked offense.

Those comparisons to James, by the way, indeed bear some weight. Doncic is a genius ball handler at 6-foot-8, routinely exploiting his size advantage to make dazzling passes most playmakers can’t see, let alone complete. He isn’t close to the quick-twitch athlete James was but compensates with total body control and a keen sense of timing and angles.

Doncic’s true trump card, with respect to James and other high-usage superstars? An improved step-back three that’s  rivaling James Harden’s as the most unstoppable in basketball.

Even if Doncic fails to sustain his early-season performance, with his stunning box-score and shooting numbers dipping, it will still be to safe to say he’ll have put together the best season ever of any player his age. Only 12 players in league history aged 20 or younger have averaged merely 20 points per game, and James – who went for 27.2 points, 7.4 rebounds, and 7.2 assists per game in 2004-05 – is the only one among them to come even remotely close to matching Doncic’s production as a rebounder and passer. 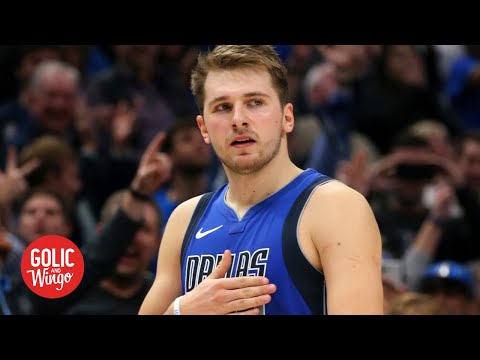 Doncic’s efficiency is what really sets him apart from sophomore James, though. His 61.2 true shooting percentage is an elite number and nearly six points higher than James’ in the mid-2000s. Such gaudy efficiency also pokes gaping holes in the criticism naysayers have recently put forth as Doncic nudges closer toward averaging a triple-double. Russell Westbrook, who’s accomplished that stunning feat three seasons running, barely managed league-average true shooting in 2016-17 and fell far below that threshold the past two years.

But just because Doncic is on track to make precocious history hardly means he’s a shoo-in for MVP. Giannis Antetokounmpo, last year’s winner, is off to a roaring start. Kawhi Leonard, when healthy enough to play, has been better than ever, and James has re-committed himself on defense while thriving at point guard. Harden’s numbers are even more jaw-dropping than last season’s, and Anthony Davis is fully coming into his own as James’ running mate with the league-leading Los Angeles Lakers.

Doncic’s competition is fierce, marked by past award-winners and all-time greats. But if this awe-inspiring level of play proves the new normal, don’t be surprised if Doncic not only remains in the MVP race but eventually becomes its front runner.