The Stock Market Is Going Nuts, and It’s Entirely Justified – For Now

The stock market is going absolutely nuts on Friday, and for once, it’s entirely justified. At least for now, anyway.

The stock market is going absolutely nuts on Friday as Wall Street reacts to a U.S. employment report that nobody saw coming.

The U.S. gained 2.5 million jobs in the month of May. That’s according to the Labor Department’s non-farm payrolls data. These statistics don’t include agricultural jobs. Nor do they include freelancers in the gig economy, the self-employed, small businesses, or people employed by family members.

So that part of the picture is unclear.

But incorporated businesses with employees hired 2.5 million people in May. We might be bouncing back to peak productivity – and stock market valuations – in very little time.

Jobs Growth Rockets Back to Life in May

The U.S. had incurred a staggering 30 million unemployment claims in the six weeks preceding May. Amid ghastly weekly jobs reports, the stock market rallied confidently throughout April.

It seemed that the CNN headlines could have read, “The Literal Four Horseman of the Apocalypse Spotted By U.S. Navy Descending On Planet,” and the Dow would have yawned.

The money was betting that the U.S. economy is more resilient and efficient in 2020 than ever before. Stock valuations reflected the belief in the old soothing mantra of presidents and central bank policymakers that “the fundamentals of the economy are strong.”

It appears the stock market was right.

The desire of the American people to work and make money is evident from May’s job growth. It aligns with the near full employment of the U.S. labor market going into 2020. The economy was humming along. People were working very hard.

And that wasn’t the only bullish factor. Enabled by digital technology deployed on an unprecedented scale with more usefulness than ever before, it takes less and less capital every year to increase the productivity of work.

Unfortunately, the May employment report also highlights something else about the stock market rally. 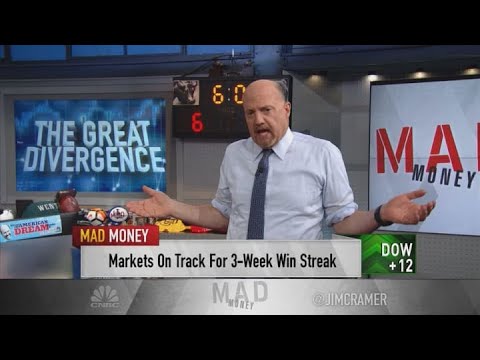 On the Thursday episode of CNBC’s “Mad Money,” Jim Cramer said the economic shutdown led to “one of the greatest wealth transfers in history” – to big business from the rest of the economy:

At the extreme end, Amazon exemplifies the acceleration of big business in the crisis, especially tech business. The titan of retail industry went on a 100,000 worker hiring spree as early as March.

And big businesses have an outsized impact on the stock market benchmarks:

The bigger the business, the more it moves the major averages. And that matters because this is the first recession where big business is coming through virtually unscathed, if not going for the gold.

During the economic freeze and $6 trillion fiscal and monetary splurge by Congress, Trump, and the Federal Reserve, the poor got poorer, and the rich got richer.

That’s something the country is going to have to grapple with at some point.

But for now, the 2.5 million Americans who went back to work in May are keeping calm and carrying on. And the stock market is continuing its trajectory back toward February’s historic peak valuations.

Disclaimer: The opinions expressed in this article do not necessarily reflect the views of CCN.com. The above should not be considered investment advice from CCN.com. The author holds no investment position in U.S. equities at the time of writing.

September 26, 2020 1 Comment
← PreviousWarren Buffett Made a Rookie Mistake – Now the Stock Market Is Making Him Pay
Next →Gold Prices Are Crashing – Here’s Why Long-Term Investors Will Buy Anyway