The Dow has surged an unbelievable 2,500 points in the past two weeks, but one stock market chart is making contrarian traders squirm.

Forget “sell in May and go away.” The Dow Jones Industrial Average (DJIA) is on an absolute tear, and the stock market’s breakneck recovery shows no signs of letting up just because spring is preparing to give way to summer.

The Dow is up 2,500 points in the past two weeks alone, while the Nasdaq Composite is on the verge of setting a new all-time high.

It’s getting more challenging for even the most ardent bears to fight the rally, loathe it though they might. But for contrarian traders, that capitulation might be the very thing that grinds the stock market’s “unstoppable” rally to an inauspicious halt.

The U.S. stock market is heading for a blockbuster end to a blockbuster week. The Dow and other major indices were already coiled for massive gains when the market opened this morning, but a blowout jobs report stunned investors – and sent risk appetite into the stratosphere.

According to Labor Department data, the U.S. employment situation didn’t just weaken less than expected in May. It actually improved.

As of 9:03 am ET, Dow Jones Industrial Average futures had rocketed 588 points or 2.24% higher. This primed the index for an incredible opening bell gap that will carry its cumulative gains over the past two weeks to around 2,500.

S&P 500 futures enjoyed a big gain too, climbing 1.45% ahead of the open. The same couldn’t be said of the Nasdaq 100, though, whose futures traded flat. 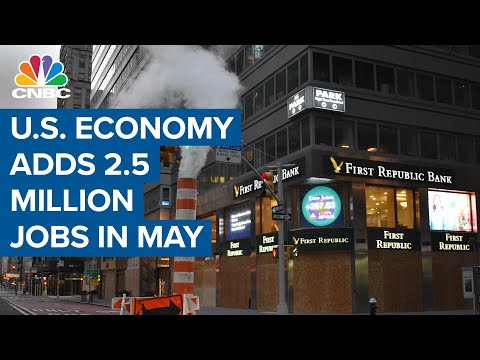 The Stock Market Is Growing Unashamedly Bullish – Maybe Too Bullish

The jaw-dropping employment report is perhaps the best argument that the economy’s fundamentals justify the stock market’s rapid ascent. But there are plenty of technical indicators that suggest this Dow Jones rally has legs too.

For one thing, the number of S&P 500 stocks trading above their 50-day moving averages is holding above 90%. At one point this week, that figure spiked as high as 98%.

Rallies this broad almost never happen, but when they do, they have almost always augured a banner year for stocks.

It’s not surprising, then, to see traders turning bullish too.

The CBOE put/call ratio – the ratio of bearish options trades (puts) to bullish ones (calls) – has collapsed in recent weeks, suggesting that traders have all but given up betting on a stock market decline.

And earlier this week, the put/call ratio for equities briefly collapsed to 0.4 – its lowest level since 2014.

These are the sorts of charts that make contrarian traders squirm. According to this investing strategy, when the markets get this universally optimistic, it’s a good sign that it’s probably time to sell (and vice versa).

Contrarianism simply believes that markets do better when people are more weighed down by fear (because, people are wrong, a lot). A screaming number of bearish option trades (puts) compared to a collapsing number of bullish option trades (calls) is a very bullish contrary indicator. As markets have rallied in dramatic fashion the last two months, that indicator has reversed.

For what it’s worth, Bahnsen thinks the rally is justified – at least over the long term. Alluding to the Federal Reserve’s unprecedented stimulus injections, he told Fox Business that investors have “three trillion reasons to invest” in the stock market – even if the economy recovers slowly.

But after today’s jobs report, maybe the fabled V-shaped recovery really is back on the table.