One of the greatest hitters in Major League Baseball (MLB) history needed to go on the defensive Sunday after accidentally using the f-bomb on MLB Network Radio. Former Yankees star Reggie Jackson used profanity when discussing the fact that Yankees superstar outfielder Giancarlo Stanton was going to miss game two of the American League Championship Series (ALCS) because of a right quadriceps injury. According to the New York Post, Jackson stated over the airwaves on Sunday prior to the game, “F–k, he has missed 150 freakin’ games, so what the f–k.”

Jackson, who was being interviewed by Jim Bowden of Sirius XM, did not realize the interview was live. The Baseball Hall of Famer went directly to Stanton about the incident, who reportedly accepted Jackson’s apology. But we couldn’t help but wonder if Reggie Jackson has a point.

It has been a tough season for Stanton, as he only played 18 regular season games. The NY Yankees have reportedly agreed to pay him $265 million.

According to Baseball Reference, he batted .288 with three home runs and 13 runs batted in and according to the Associated Press  missed 144 games due to various injuries to his biceps, shoulder, calf, and knees. The quadriceps ailment is just the latest injury Stanton has had to face in 2019, and the star outfielder would have been open to more criticism when Yankees Manager Aaron Boone stated to Colin Martin of SNY TV that he “kinda injured his quad.” 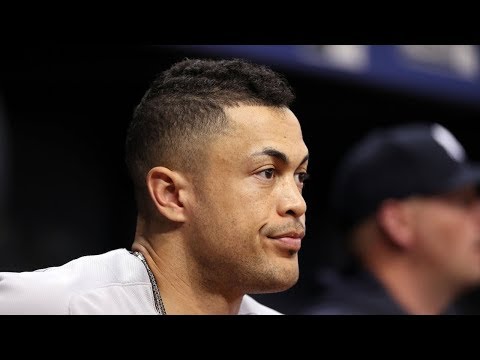 It appears Stanton has a genuine aliment as according to the Associated Press, an MRI revealed the strain. However, one must realize this is playoff time, and many fans of Yankees Nation would argue that players need to play through minor injuries the next two weeks in order to win the World Series.

Heading into game three of the ALCS at Yankee Stadium on Tuesday, the Houston Astros have some momentum after their huge game-two 3-2 win on Sunday;  Carlos Correa hit an 11th-inning walk off home run to tie the ALCS at one game apiece. They will have even more energy against the Yankees with Gerrit Cole taking the mound. Cole has arguably been the best pitcher in the MLB in 2019. He led the regular season with 326 strikeouts and has an unbelievable postseason earned run average of 0.57 in 15 2/3 innings pitched. The Yankees will counter with starting pitcher Luis Severino, who like Stanton had his fair share of injuries in 2019. Severino had not pitched until Sept. 17 due to shoulder and lat problems.

Stanton is reportedly questionable for Tuesday’s game. Reggie Jackson was completely right for asking why Stanton wasn’t on the field for game two. All will be forgotten if the Yankees upset the Astros and reach the World Series.