The bursting of the housing bubble will likely begin in big cities as more Americans move to the suburbs. It looks like post-pandemic America will hurt large urban centers the most.
PHNjcmlwdCBhc3luYyBzcmM9Imh0dHBzOi8vcGFnZWFkMi5nb29nbGVzeW5kaWNhdGlvbi5jb20vcGFnZWFkL2pzL2Fkc2J5Z29vZ2xlLmpzIj48L3NjcmlwdD4KPCEtLSBUb3AgQXJ0aWNsZSBDQ04gLS0+CjxpbnMgY2xhc3M9ImFkc2J5Z29vZ2xlIgogICAgIHN0eWxlPSJkaXNwbGF5OmJsb2NrIgogICAgIGRhdGEtYWQtY2xpZW50PSJjYS1wdWItNjQ3MjA2OTY5MzY1NzE0MyIKICAgICBkYXRhLWFkLXNsb3Q9IjU4NDY0ODIyMjMiCiAgICAgZGF0YS1hZC1mb3JtYXQ9ImF1dG8iCiAgICAgZGF0YS1mdWxsLXdpZHRoLXJlc3BvbnNpdmU9InRydWUiPjwvaW5zPgo8c2NyaXB0PgogICAgIChhZHNieWdvb2dsZSA9IHdpbmRvdy5hZHNieWdvb2dsZSB8fCBbXSkucHVzaCh7fSk7Cjwvc2NyaXB0Pg==

Mortgage rates keep falling, having set another record low last week. The average interest rate for 30-year fixed-rate mortgages declined to 3.19% from 3.26%. Such low rates have been fueling the U.S. housing market. 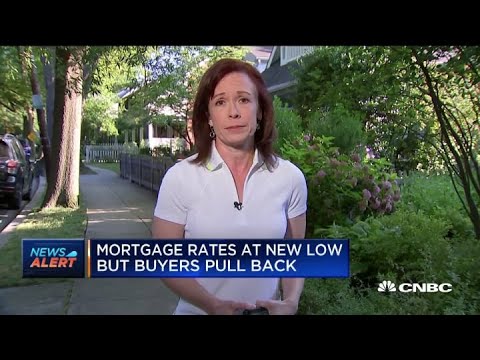 The total volume of mortgage applications increased by 5.1% last week, according to the Mortgage Bankers Association.

As states and businesses continue expanding activity, homebuyers are showing increasing interest in purchasing homes, particularly those looking to take advantage of enticingly low mortgage rates. However, extremely scarce inventory, tight mortgage underwriting, and high unemployment continue to be the main challenges for many buyers. The latest weekly housing data shows national inventory is on a steep downward trend.

Home Prices Are Rising – For Now

Record low mortgage rates have boosted housing demand. Not everyone who wants to buy a home can do it, though, as there is a lack of homes to sell. High demand and a low supply of properties have increased home prices, making them less affordable.

As measured by CoreLogic, home prices rose 4.8% year over year in June, the fastest growth rate since November 2018. Fannie Mae expects home prices to increase by 4.4% this year.

Like the bond and stock markets, the housing market is in a bubble. All those markets could tumble in the coming months.

The rapid surge in unemployment during the pandemic has created uncertainty about the economic outlook.

Fannie Mae expects house price appreciation to slow in 2021 due to persistently high levels of unemployment.

It’s likely housing will feel the broader economy’s downturn eventually, though to a mild degree, and home values will fall in the coming months.

The Housing Market Will Pop First In Big Cities

The housing bubble will likely burst first in urban markets across the U.S.

Prices for existing homes in 19 major U.S. cities rose 4% in April from a year earlier, according to the S&P CoreLogic Case-Shiller National House Price Index.

According to Nobel Prize-winning economist Robert Shiller, the pandemic could cause urban home values to fall if employees continue to work from home and give up big cities:

People won’t be willing to spend $1 million for a small condo in coming years if that’s the way they feel.

Several Americans have started working from home during the pandemic to respect social distancing. As virus cases are rising in the U.S., this way of working will likely become permanent for many. 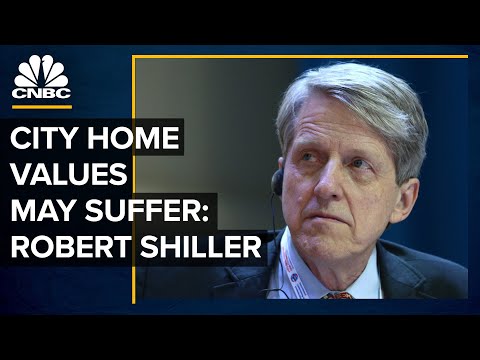 Workers might be less inclined to pay a premium to live in the city if they don’t need to be close to their workplace anymore.

Restaurants and movie theaters might not be enough to keep people in big urban centers. It’s not very enticing to go to these places, with all the sanitary measures in place. People who lost their jobs don’t have the money to go out anyway.

Fleeing to the suburbs was a trend that was there before the pandemic, which the virus only accelerated.

This migration to the suburbs is not a new trend, but it has become more pronounced this spring. After several months of shelter-in-place orders, the desire to have more space and the potential for more people to work remotely are likely two of the factors contributing to the popularity of the burbs.

The risk that home prices will decline, especially in big cities, shouldn’t be overlooked. People who are thinking of selling their condo might want to do so before prices plunge. Record-low mortgage rates won’t save the housing market.

Stephanie Bedard-Chateauneuf
Stephanie has been writing about stocks and financial markets for several years. Based in Canada, she has written for The Motley Fool and Seeking Alpha. She received an MBA in finance and worked for National Bank of Canada. Check out more of her experience on LinkedIn + and follow her on Twitter. Reach her at stephanie.chateauneuf (at) gmail.com or visit her profile on Muck Rack here. Stephanie is a Trusted Journalist.
Subscribe
0 Comments
Inline Feedbacks
View all comments
← PreviousTesla Stock Might Join the S&P 500 – Bulls Are Still Playing With Fire
Next →Stocks Look Unstoppable – But the Banks Know Everyone’s Broke

Has the U.S. Housing Market Become Recession-Proof?
August 16, 2020 No Comments

What If the Housing Market Recovery Isn’t V-Shaped After All?
July 1, 2020 No Comments

The Housing Market Is Showing Signs of Weakness – And it Will Get Worse
June 24, 2020 No Comments