With rates destined to go back to zero, the margins of major financial institutions are likely to take a hit.

Bank shares were among the hardest hit, with JPMorgan and Bank of America stocks plunging 3.8% and 5.5%, respectively. Citigroup and Morgan Stanley were each down more than 3%.

By comparison, the large-cap S&P 500 Index closed down 2.8% in volatile trading.

While banks clearly weren’t the only segment of the stock market in the red, the sector tends to be more sensitive to rate cuts.

As CNBC notes, banks’ margins decrease if they pay out deposit rates at a higher level than market rates. Earnings are also adversely impacted whenever the spread between short-term and long-term rates flattens.

What happens to banking stocks will have direct repercussions on the broader equities market. At $6.57 trillion, financials stocks are the second-largest component of the S&P 500:

Rates are Returning to Zero

As you probably know by now, the Federal Reserve issued an emergency rate cut on Tuesday. The decision follows a long line of rate cuts since last summer but was the first “emergency” measure since the financial crisis.

Following the 50-point reduction, the target for the federal funds rate now sits at 1% to 1.25%. Traders expect another 50 basis points in cuts before 2020 is over.

In announcing the emergency rate measure, Fed Chair Jerome Powell had enough gall to call the economy “strong.” Typically, a central-bank rate cut is an admission that the economy most certainly isn’t strong. 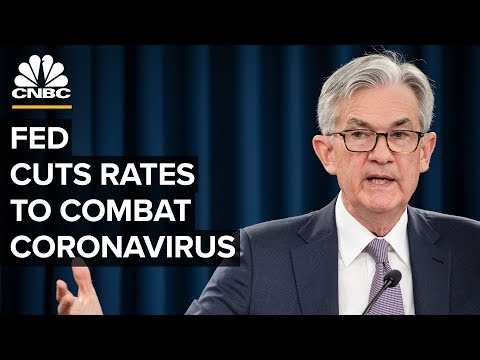 Although markets and the Federal Reserve didn’t see coronavirus coming, interest rates were going to return to zero regardless of the disease.

That’s because the Fed’s final series of rate hikes in late 2018 proved too much for the market to handle. Stocks swiftly entered bear-market conditions around Christmas of that year, forcing the Fed to shift course on monetary policy the following month.

And as we know, the rest is history.

With stocks and the economy becoming addicted to low interest rates, the Fed can never normalize monetary policy again under the current financial regime. Doing so would pop the inflation-driven bubble and drag the U.S. economy into a deep recession.

The stock market should be coming down. The only thing really supporting it is the Federal Reserve and all the money they’re printing with their stealth QE program, although it’s not stealth really. Everybody knows they’re doing it. They just refuse to admit it. But there’re no earnings behind this. There’s no strong economy behind this. This is an inflation-driven bubble, but the air should be coming out.

The Federal Open Market Committee (FOMC) still has a policy meeting scheduled for Mar. 17-18 in Washington. Policymakers will give their quarterly summary of economic projections covering GDP, unemployment and inflation. The now-infamous ‘dot plot’ summary of interest rates expectations will also be released alongside the official policy statement.