Blake Griffin’s Days as a Star Are Over

As Griffin manages ongoing knee pain that kept him out of a loss to the Washington Wizards earlier this week, signs of his overall decline have become impossible to ignore.

Blake Griffin was supposed to be his team’s panacea.

The Detroit Pistons went 4-6 over the first 10 games of the season, with half of those losses coming by double-digits. They were playing below-average basketball on both ends of the floor, lacking any semblance of an established identity they could rely on as the season continued.

But Griffin missed the first two weeks of 2019-20 while finishing his recovery from offseason knee surgery. Stars change everything in the NBA, and Detroit had ample reason to believe his addition would provide the jolt necessary to turn its season around. Griffin, after all, earned Third Team All-NBA honors a year ago.

Over a month into his return, though, the Pistons have gone just 7-8. Worse, as Griffin manages ongoing knee pain that kept him out of a loss to the Washington Wizards earlier this week, signs of his overall decline have become impossible to ignore.

A Shell Of Himself

Base statistics tell the story as well as anything else. Griffin is averaging 16.3 points, 4.4 rebounds, and 3.3 assists in 28.7 minutes per game, all career-lows. He’s shooting 45.0 percent on twos and 27.0 percent on threes, contributing to an ugly 49.9 true shooting percentage – worst in the league among high-usage players.

Even more discouraging are widespread indicators of sweeping athletic deterioration that were easy to see coming.

Griffin is shooting just 56.8 percent from the restricted area, over 10 points worse than last season. He’s dunking only once every three games, easily the lowest rate of his career and further indication of his utter lack of lift around the basket.

It’s been at least a half decade since Griffin possessed the explosiveness that propelled him to immediate superstardom during his NBA debut in 2010-11. Multiple knee surgeries have slowly diminished that superhuman trait, and Griffin admitted years ago that he needed to be more judicious while attacking the rim to preserve his body for the long haul.

Not only did that procedure fail to relieve him of discomfort, but it’s left Griffin without any semblance of functional explosiveness around the rim. Needless to say, he looks nothing like a player who once leapt over the top of seven-footers with casual regularity.

Griffin’s departure from his early days of flying to the rim with reckless abandon was complete last season. But it had negligible negative impact on his game because Griffin had grown so shockingly effective as a perimeter ball handler and shot-maker.

He shot 36.2 percent on 7.0 three-point attempts per game in 2018-19, both career-highs. Over half of his tries from deep came off the dribble, and his 35.8 percent shooting on those attempts was right in line with that of James Harden, Damian Lillard, and Kemba Walker. 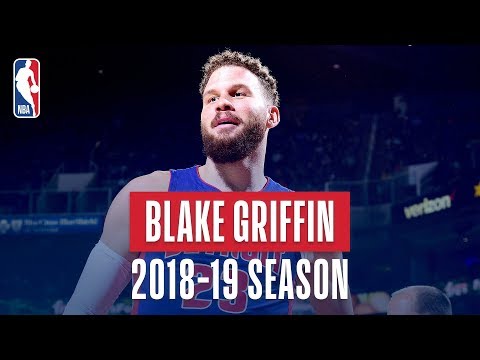 Maybe Griffin’s early-season struggles from three are a result of his re-acclimation after months of rehab. But defenders are playing him more tightly now, less concerned with his ability to blow by them and finish at the rim.

If Griffin isn’t making pull-up triples at a borderline elite rate, basically, his impact offensively will remain as muted as its been since he returned to the floor. The Pistons have fared worse offensively when he’s on the floor, and Andre Drummond’s efficiency has suffered as a result of playing next to him.

Many feared when Detroit traded for Griffin in January 2018 that his waning athleticism rendered him ill-equipped for an alpha-dog role. He proved that assumption wrong last season with remarkable skill development. But after yet another debilitating knee surgery, Griffin’s time as a star seems officially over.

Jack Winter
Jack Winter lives in Portland, OR. A veteran NBA writer, he also has experience covering the NFL, US politics, and pop culture. Follow him on Twitter, or reach him directly at john.armstrong.winter@gmail.com.
Subscribe
0 Comments
Inline Feedbacks
View all comments
← PreviousHere’s Why LeBron James – Not Giannis – Is the NBA’s Best Player
Next →NCAA Castaway James Wiseman Is a Perfect Fit for the Reborn Warriors

LeBron James Is the Master of Subtle Shade
Travis Pulver