Adam Silver clarified his comments on Tuesday about the controversy surrounding the NBA’s relationship with China. But unfortunately for a pair of Philadelphia 76ers fans, the league’s commitment to free expression espoused by the commissioner in Japan apparently doesn’t apply to them.

China reacted swiftly and severely to Morey’s tweet and the NBA’s initial “both sides” defense. The CBA suspended its relationship with the Rockets, the most popular team in China; Chinese state television and tech giant Tencent will no longer broadcast NBA games until further notice; and former Rockets superstar Yao Ming is “extremely hot” about the league’s refusal to defend China’s sovereignty. 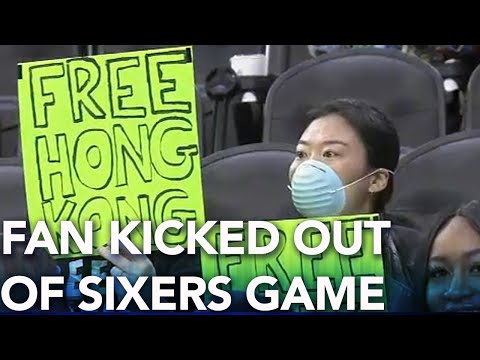 Sam Wachs and his wife attended Tuesday’s contest with homemade signs reading “Free Hong Kong.” After the signs were confiscated by arena personnel, they stood and yelled, “Free Hong Kong,” upon which point they were escorted from the arena by security.

In a statement released on Wednesday, Philadelphia distanced itself from the decision to remove Wachs and his wife, contending it fell exclusively to arena personnel. Wells Fargo Arena indicated as much, justifying their ejection by saying Wachs and his wife were “disrupting” the fan experience.

In the NBA’s Fan Code of Conduct, the only language that could potentially legitimize their ejection relates to a stipulation that guests refrain “from disruptive behavior, including foul or abusive language and obscene gestures.”

The NBA faced widespread criticism for its original response to the controversy, in which it called Morey’s tweet “regrettable.”

Silver released a much longer statement the next day and expanded on it during a press conference in Japan, reiterating his commitment to “support freedom of expression…by members of the NBA community.” More indicative of Silver’s staunch adherence to protecting free speech in the NBA world was his answer to a question about CCTV’s decision to no longer broadcast upcoming exhibition games between the Los Angeles Lakers and Brooklyn Nets, despite the fact they will be played in Shanghai and Shenzhen – unless the preseason tilts are canceled, of course.

“It’s not something we expected to happen. I think it’s unfortunate. But if that’s the consequences of us adhering to our values, we still feel it’s critically important we adhere to those values.”

Silver has built up immense goodwill in and outside of NBA circles since taking over as commissioner in 2014. He seems to have avoided substantially eroding it by clarifying the league’s stance on Morey’s support of Hong Kong protestors, remarks that “thrilled” San Antonio Spurs coach Gregg Popovich for the “courage and leadership” they displayed.

Silver no doubt comprehends the injustices of China’s government, not only related to Hong Kong, but also to the internment of millions of Uighurs and other ethnic minorities, as well as the overarching suppression of democratic ideals. The realities of capitalism and his de facto role as an employee of NBA owners, though, ensure he needn’t criticize China for its repressive acts of governing.

But preventing ticket-buying fans from expressing discontent with an authoritarian foreign regime stands in stark contrast to Silver’s adherence to a lack of censorship. Wachs and his wife didn’t single out the Guangzhou Loong Lions, didn’t use profanity, and didn’t infringe on the league-mandated right of fellow fans to “enjoy the basketball experience.”

They deserve an apology, not just from the Sixers, but the man who insists he’ll continue standing up for free speech at the expense of the NBA’s financial bottom line. Otherwise, Silver’s clarification on the league’s support of Morey – and by proxy, the “NBA community” at large – will ring just as feckless as its broadly-denounced initial statement.