The Los Angeles Lakers weren’t quite as competitive as the final score of their 111-104 loss to the Milwaukee Bucks indicates.

They were down 19 points at halftime, and trailed by double-digits for most of the fourth quarter before a last-gasp run gave them a fleeting glimmer of hope. But the Bucks extinguished it quickly, and the Lakers never came within a single possession of tying the game in crunch time. 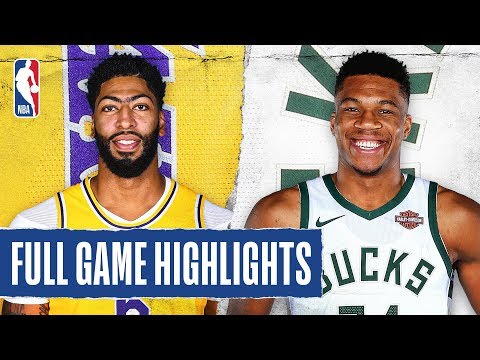 It was a statement win for Milwaukee and Giannis Antetokounmpo, further evidence that if they’re not prohibitive championship favorites, the Bucks at least match up extremely well with their chief competition for the Larry O’Brien Trophy.

But just because Los Angeles was thoroughly outplayed hardly means there are no silver linings to glean from its first consecutive loss of the season.

Road weariness is real, and it won’t play a part should these teams meet in the NBA Finals.

On a night when James, frustrated by Milwaukee’s length, energy, and connectivity on defense, didn’t have it going as a scorer, Davis came up huge to give his team a puncher’s chance late.

A whopping 28 of his game-high 36 points came in the second half, when he shot 9-of-16 from the field and 10-of-11 from the free-throw line while refusing to come out of the game.

"We're going to go home, regroup and get ready for the next one."@AntDavis23 talks with @LakersReporter about staying on the floor for the whole second half and playing through his ankle injury. pic.twitter.com/MIncTcXwCF

Making Davis’ play all the more impressive? He fought through a tender right ankle that kept him out of Tuesday’s loss to the Pacers and made him a game-time decision against the Bucks.

Davis was the best player on the floor at times versus Milwaukee, but would obviously be better equipped to face a foe of that magnitude when fully healthy.

The Bucks allow just 102.7 points per 100 transition plays, per Cleaning the Glass, stingiest in the NBA. Their success stems not from limiting open-floor opportunities in the first place but stymying them when they arise.

The Lakers pushed the ball up-court every chance they got on Thursday, adding an estimated 8.7 points in transition. Los Angeles will always labor in the halfcourt against a team like Milwaukee, given its lack of multiple dynamic ball handlers and elite long-range shooters.

Creating efficient offense through transition becomes especially important under that duress, and Frank Vogel’s team was able to do it against the Bucks – occasionally to highlight-reel effect.

Milwaukee outscored Los Angeles 42-29 in the second quarter, when it shot 62.9 percent from the field and connected on 6-of-11 from beyond the arc. The Lakers had seven turnovers compared to just two assists in that stanza, too.

No quarter matters more than any other, and the Bucks’ two-way effectiveness during the second was an encapsulation of what’s made them the best team in basketball over the first two months of the regular season. It was hardly a total fluke.

But it’s safe to say neither team will dominate a 12-minute stretch like Milwaukee did in the second quarter the next they square off.

Antetokounmpo was brilliant on Thursday, staking his most forceful claim yet as basketball’s best player. In the regular season, at least, that crown really does belong to him.

Giannis knocks down his 5th 3 and he wants the crown. pic.twitter.com/oqFrDCiYjm

But Antetokounmpo, as much as he’s improved from deep this season, probably won’t set another career-high in triples every time the Bucks meet a fellow contender. If he does, no one is beating Milwaukee – now or in the postseason.