The Portland Trail Blazers’ first defensive possession against the Los Angeles Lakers on Friday served as a perfect example of a problem they already had no way of fixing.

LeBron James circled the arc to the left block, turned his back to the basket, and three dribbles later had an easy layup at the rim. Rodney Hood was in a solid defensive position throughout the sequence, but his lack of size and physicality left him at James’ mercy.

Less than eight minutes of game time later, Portland’s most glaring personnel deficiency flashed even brighter. Hood grabbed a defensive rebound and planted his left foot to ignite a fast break, then crumpled to the floor in agony.

Compounding an Existing Problem for the Blazers

Hood isn’t a star, he and hasn’t been a panacea for Portland in the season’s early going despite playing perhaps the best basketball of his career. He’s a marginal NBA starter at best. While a team losing that type of contributor for the season’s duration is a debilitating development, it’s rarely the difference between team-wide success and failure.

The offseason assumption that the Blazers’ collection of forwards would be good enough to win at the highest level was always specious.

None of them are true difference-makers offensively, and Kent Bazemore’s dogged, disruptive defense only matters so much when matched up with the likes of James, Kawhi Leonard, and Luka Doncic – each of whom possesses a major size advantage on Portland’s designated stopper. Hood is clearly miscast in that role, and Mario Hezonja is an abject minus defensively.

The Blazers entered 2019-20 with the full knowledge that their lack of high-level talent and viable defenders on the wing was a problem. Without Hood, it could be what dooms them.

Hood’s torn Achilles is the third major injury suffered by a Portland starter in the last nine months.

Zach Collins, pigeonholed into starting at power forward this season, dislocated his left shoulder in early November and will be out until March at the earliest. Franchise center Jusuf Nurkic, meanwhile, is still recovering from a gruesome compound fracture he suffered in late March of last season. There’s no timeline for his return to the floor, though he could potentially be back in March, too.

Without them, Portland will rely even more on Carmelo Anthony – signed in the wake of Collins’ injury, by the way – and likely re-insert Hezonja into the rotation. Terry Stotts will ask more of youngsters Anfernee Simons and Nassir Little, too.

But none of those players offer consistent one-way production, let alone provide a positive nightly impact on both sides of the ball.

The Blazers are 9-14, two games back of the Minnesota Timberwolves for eighth in the West.

Before Hood’s injury, there were mounting expectations that Portland was turning the corner. Stotts’ team had won four of five coming into Friday night’s action, and Anthony’s surprising effectiveness had changed the outlook of a team frustrated by early-season woes.

But without Hood all year and Collins and Nurkic for the foreseeable future, it’s fair to wonder if the Blazers have the goods to make the playoffs at all. Their season-long performance already made that answer murky, and Hood’s absence ensures it’s even cloudier. 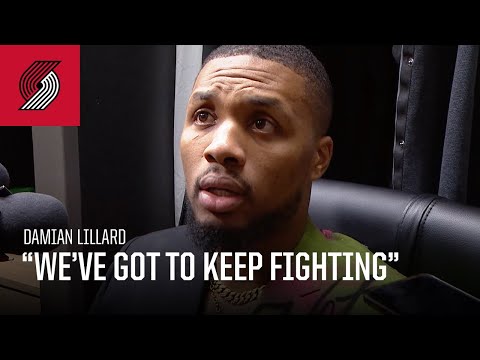 Coming into 2019-20, Portland possessed wide-eyed dreams of true NBA title contention. They vanished a few weeks ago, though, and have now been replaced by the nightmarish prospect of missing out on the postseason for the first time since 2013.