Why Mark Zuckerberg Is Bound to Crush the Facebook Employee Revolt

Facebook (NASDAQ:FB) employees are speaking out over a decision by Mark Zuckerberg not to delete or flag President Trump’s controversial posts on the social media platform.

On Monday, dozens of Facebook employees staged a virtual walkout. Some employees have vowed to continue agitating for change.

Some of the employees who have called out Zuckerberg for allowing the controversial content to continue being hosted include Andrew Crow, the head of design for Facebook’s smart device Portal.

Will Facebook employees bend Mark Zuckerberg to their will?

But as with all things at Facebook that don’t align with Mark Zuckerberg’s thinking, the employee revolt is likely to produce nothing.

A Facebook employee protest on a related issue in October ended unsuccessfully. Then, the employees were protesting against Facebook’s policy to allow false political advertisements without fact-checking them like is the case with other ads.

Zuckerberg can have his way by shutting down rebellions before they become unmanageable. Here is how he does it. 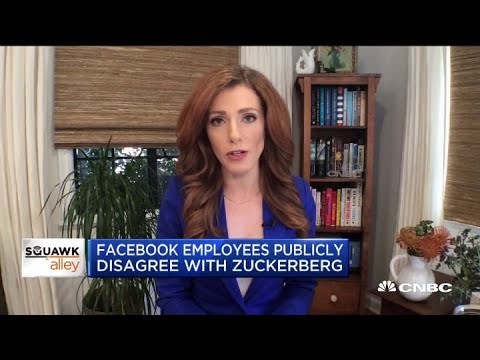 Since Facebook went public, Zuckerberg’s hold on the company’s board has been bolstered. This year, two directors have departed as Zuckerberg added close friend and Dropbox founder Drew Houston.

In the last three years, board members who were able to stand up to Zuckerberg, such as Reed Hastings, have left. Some directors, such as Erskine Bowles, quit because their advice was being disregarded.

Susan Desmond-Hellmann, Facebook’s lead independent director since 2015, quit the board last year. While Facebook claimed she left for health and family reasons, reports indicated it was because the board wasn’t “operating properly.”

Among the rank and file employees, dissenting voices have met a cruel fate. Last year, a Facebook employee was fired after protesting a colleague’s suicide.

Employee Yi Yin chanted, “Give me the truth, Zuckerberg,” at the protest outside Facebook’s headquarters. The suicide was believed to have been prompted by workplace bullying.

The scandals Facebook has generated in the last decade are too many to count. Shareholders have not been silent, though, and have been trying to undercut Zuckerberg’s tremendous power. But year after year, these efforts have been fruitless because of Facebook’s dual share class structure.

While Zuckerberg’s stake in Facebook is around 14%, he controls nearly 60% of the voting power due to the dual-class shares.

Zuckerberg has used this massive power to his advantage. In an audio recording released last year, Zuckerberg acknowledged that he would have been sacked long ago without the complete control he currently wields.

The near-absolute control ensures that decisions are shaped by his worldview alone. The employees can protest all they want, but they won’t change their boss’ mind.

In matters of content moderation, Zuckerberg always rushes to the freedom-of-speech defense.

Additionally, Zuckerberg repeatedly claims that the social media giant is a platform and not a publisher.

That’s inaccurate, though, as algorithms determine what kind of content users get to see.

These algorithms prioritize engagement, and in most instances, this is the content that enrages or feeds the user’s biases. Despite there being no human involvement in this process, this is publishing.

As Facebook’s critics become more vocal over Trump’s posts, you will hear similar arguments from Zuckerberg with increasing intensity.

But no matter how energized Facebook employees get, they are unlikely to change the CEO’s stance. If in doubt, they should ask ex-employees, board members, and co-founders who have traveled a similar path and realized the futility of it all.

September 24, 2020 No Comments
← PreviousTarget’s Stock Poised to Continue Rally Despite Rioting & Looting Across U.S.
Next →Economists Rush to Declare End to the Recession – Here’s Why They’re Wrong