As Patrick Mahomes surveyed the scenes around him following the Kansas City Chiefs’ Super Bowl victory in Miami, he looked every inch a player with greatness in his future.

The youngest quarterback to ever win Super Bowl MVP. Even the great Tom Brady has to give him his props for that one.

Are we entering the era of Patrick Mahomes?

Can Mahomes eventually pass Brady as the GOAT?

"Bill Russell had more MVPs than anyone, 11 championships. In 2020 … people say MJ, LeBron passed him. If Mahomes wins a handful of rings & continues to do things on the field we've never seen, it's on the board." — @getnickwright pic.twitter.com/1qva73uvlc

I know, I know. There’ll be plenty of Patriots fans who say that I’m drunk on Super Bowl euphoria. But GOAT or not, you can’t deny that Tom Brady is at the point in his career when it’s time to pass the torch.

And who’s he going to pass it to if not Patrick Mahomes?

Even the best players in the league need a great team around them, and boy does Patrick Mahomes have that. The Chiefs are by no means the finished article. There’s room for improvement, but they have the foundation.

Head coach Andy Reid ranks among the best coaches in the game’s history. Long derided as the coach who couldn’t win “the big one,” Reid is now free of that cloud and is set to secure his legacy.

Reid has always been an offensive whiz. But we all know great teams need a solid defense to thrive. Kansas City fits that bill.

The Chiefs have a young defensive core built around 6-foot-6, 300-pound defensive tackle Chris Jones. Throw defensive-end Frank Clark and safety Tyrann Mathieu into the mix, and the future looks bright. Did I mention that none of the three are over 27 years of age?

The Top 10 @PatrickMahomes plays of the season! 🔥 #ChiefsKingdom pic.twitter.com/xMb6Bz6Wl4

Add Patrick Mahomes to the discussion, and you have the foundation for a dynasty – if everyone can stay healthy.

Mahomes Is on the Tom Brady Career Trajectory

There’s a lot to be said for getting that first Super Bowl victory early.

If a young quarterback loses his first one, it can easily lead to a reputation as a player who can’t get it done. That’s a club that no player with ambition wants to join.

Players like Fran Tarkenton and Dan Marino are Hall of Famers who never managed to win the big one, and it keeps them out of that conversation of the greatest of all time.

Even Peyton Manning’s reputation never really recovered from his two losses in 2009 and 2013, despite winning championships in 2006 and 2015. 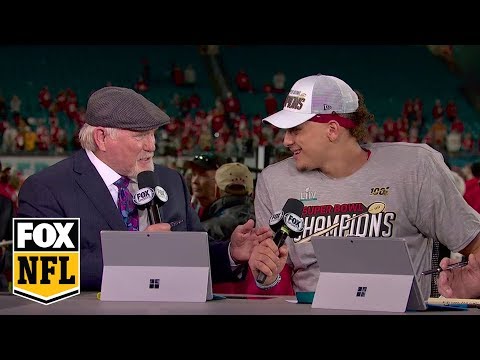 Mahomes has completely avoided that anchor by grabbing his first Super Bowl win at the age of 24.

In his first season as a starter, Patrick Mahomes threw an amazing 50 touchdown passes, which matches the best season Brady ever had. At such a young age, his throwing accuracy and decision making are already elite.

Quarterbacks tend to get better as they close in on their 30s. It’s safe to say Patrick Mahomes has the world in his capable hands. Much like Tom Brady did a generation ago.

“I honestly don’t know [if there is a ceiling for him]. I’ll wait to find out and see, but I don’t think there is.”