Two key stocks metrics have soared to levels unseen since the dot-com bubble in the 1990s. It raises the risk of an S&P 500 pullback, coming off a 55.7% rally since March 23.

The Buffett Indicator and the number of option bets predicting an S&P 500 upsurge rose to nearly 20-year highs. The confluence of the two indicators and the fading U.S. dollar puts pressure on the stock market.

According to data from Bespoke Investment Group, retail investors are fueling the S&P 500’s options volume.

The explosive popularity of retail trading platforms like Robinhood led to a “massive boom in options volumes,” BIG analysts explained.

The analysts noted that the noticeable increase in “retail enthusiasm” coincided with a massive volatility spike. It created a perfect storm for individual investors to enter the market.

In any event, the prevalence of call buying is in our view a clear-cut signal that sentiment is extended after a blistering equity market rally since March.

Whether the S&P 500 could continue to surge, despite signs of a crowded market, remains uncertain. But the analysts said the S&P 500 rally’s pace in recent months could intensify the downtrend.

When there are many overleveraged bets in the market, it can cause steep short-term price movements.

A growing number of investors have filed S&P 500 call options throughout the third quarter, fueling the market’s momentum.

A stock market metric dubbed the “Buffett Indicator” reached 1.7 on August 21. That signals that the stock market is overvalued by more than 71%.

The Buffett Indicator divides the value of the entire U.S. stock market by annual U.S. GDP. It evaluates fair value using the most prominent economic indicator.

Before the dot-com bubble burst, the Buffett Indicator rose to 1.71. It is a mere 0.1% away from surpassing the dot-com era in terms of overvaluation.

Similar to BIG analysts, Sevens Report Research founder Tom Essaye said a downtrend is not guaranteed. But if the S&P 500 begins to drop, Essaye noted that “it’s a long, long way down to fundamental support.”

The Falling Dollar Is a Cherry on Top

The dollar has declined sharply since March due to a culmination of factors including soaring virus cases and lagging economic growth. In the second quarter, the U.S. economy saw its biggest-ever decline. Watch the video below. 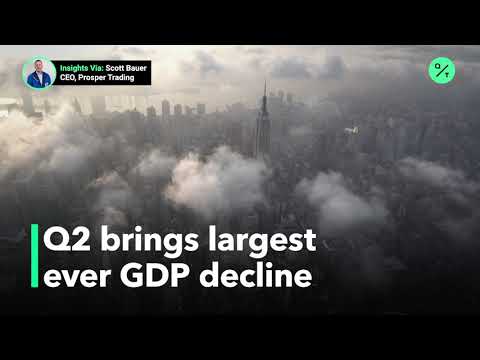 From the monthly high in March, the DXY has declined by more than 10%.

Historical data shows that a weak dollar tends to slow the stock market’s momentum. Given the S&P 500’s bubble-like rally, the declining dollar might raise the chances of a pullback.