Donald Trump announced he’ll be signing an official “Phase One China Trade Deal” on January 15. That put something in Wall Street’s morning coffee. His tweet ignited a swift spike in the Dow Jones Industrial Average and other major stock indices, though the caffeine rush didn’t last.

The president says the signing will take place at the White House with high-level representatives from China. He’ll be traveling to Beijing at a later date to commence “Phase Two” trade negotiations.

Trump’s announcement ends weeks of investor speculation and hopeful trepidation. The stock market charted an exuberant rally lasting through the holidays following the president’s Oct. 11 announcement that the US and China were nearing a trade agreement.

The Dow Jones Industrial Average added over 1,600 points to its benchmark index by New Year’s Eve after the initial Phase One announcement delayed tariff hikes.

JUST IN: President Trump says that he will sign the phase one trade deal with China at the White House on Jan. 15. https://t.co/MSdrkGy2cq pic.twitter.com/BAnOCvbDED

At the time, Trump said the agreement would take weeks to put into writing, but he claimed the signing ceremony would occur in November. By December, the signed agreement had yet to materialize. The rally continued anyway, as markets got a massive lift out of holiday sales, despite the stalling trade talks.

But stock benchmarks began to slip as the new decade approached over fears of overvaluation, as well as the ongoing delay in signing the Phase One agreement.

What’s in The Phase One Trade Deal? 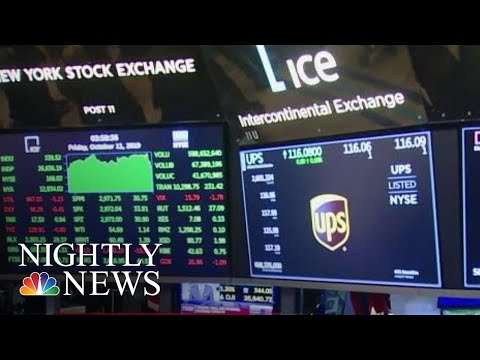 Speculation about the trade deal raged in the final days of 2019.

On Monday, the South China Morning Post cited an unnamed source saying the trade deal would be signed this week. The source claimed that China’s lead negotiator, Vice-Premier Liu He, would lead Beijing’s delegation to sign the deal on Saturday.

The same day, White House trade adviser Peter Navarro told Fox News that the deal would probably be signed in “the next week or so.” But he also cautioned viewers not to trust anonymous sources:

Never believe reports on anonymous sources. Get it from President Trump or… [US Trade Representative] Robert Lighthizer

The final Phase One trade deal will reportedly include Chinese commitments to purchase $40 billion to $50 billion in US farm products annually. It will also address how China manages its currency, the renminbi.