The Atlanta Hawks were abruptly awakened from early-season dreams of the playoffs on Tuesday against the Miami Heat when Trae Young fell to the floor in agony, clutching his right ankle. As trainers rushed to the floor at the next dead ball, Young put his head to his shoulder, concealing both the pain on his face stemming from an ugly ankle injury and the prospect of his breakout sophomore campaign ending so soon after it started. 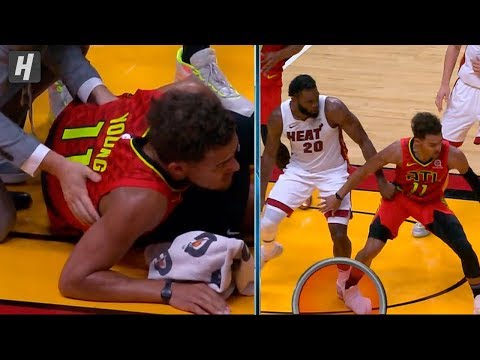 Fortunately, the worst fears were quickly alleviated. Young confirmed as much on Instagram after the game, insisting he’d #BeBackSoon, and ESPN reported Wednesday afternoon that his tender sprained ankle had improved overnight, allowing for the possibility he could be back on the floor next week.

Good news for Atlanta guard Trae Young, per sources: Improvement on his right ankle today. No plans for an MRI. He could return as soon as next week.

Good thing, too, and not just for Young and the Hawks. Why? The 21-year-old set the league ablaze over the first week of the regular season, not only cementing himself as arguably the game’s most valuable young playmaker, but perhaps its most exciting, watchable, and imminently flammable scorer since Stephen Curry’s meteoric rise led him to the top of the league.

Remember Curry’s 2015-16 campaign, when he led the Golden State Warriors to a record 73 wins in the regular season and became the only unanimous MVP in league history? He broke longstanding rules of what constituted “good” and “smart” basketball back then, routinely pulling up off the dribble from 30 feet and taking on multiple defenders all by himself. Curry was his own nightly highlight reel, riding his unprecedented play to global superstardom and an Under Armour slogan that can still spark heated debate.

Over the first three games of 2019-20, Young updated Curry’s re-written rules with the type of shot-making aggression and dribbling and passing ingenuity we hadn’t seen since 2016 – and maybe ever.

The eye test, tellingly, was even more impressive than the numbers. After an offseason spent lighting up the summer pickup scene, Young brought his unwavering sense of confidence and flair to the NBA, leaving defenses helpless to stop him.

Curry Comparison Is Also Cause For Caution

Curry’s career was once in serious jeopardy. He underwent two surgeries on his right ankle between 2011 and 2012, limiting him to just 23 games in his third season – and leading to the four-year, $44 million contract extension that ultimately proved the league’s biggest bargain, permitting the Warriors to sign Kevin Durant.

Young has garnered Curry comparisons dating back to high school. But as his resemblance to Curry crests at basketball’s highest level, it’s key to remember that it’s not only rooted in his superlative offensive skills, but Young’s physical limitations, too.

At 6-foot-1, 180 pounds, Young is shorter and lighter than Curry, who only shed the dreaded “injury-prone” label after years of training. Young worked tirelessly over the offseason, adding about 15 pounds of muscle, but will always be beset by underwhelming physical tools compared to his NBA peers.

Young claimed after the game that he’d never suffered a sprained ankle before. Needless to say, here’s hoping that string of luck persists well beyond his current absence. The NBA is at its best when basketball’s newest stars rise higher and higher, and like Curry before him, Young has the chance to exist in an orbit all his own.

← PreviousThe Spurs Are Thriving Without Kawhi Leonard
Next →Did Baker Mayfield Just Have His Ryan Leaf Moment?