Beast Mode is back. Well, almost. As the Seattle Seahawks reel from an injury-ravaged backfield, Marshawn Lynch will meet with team officials on Monday about potentially returning to the NFL.

If all goes according to plan, Pete Carroll says there’s “a really good chance” Lynch and the Seahawks will reunite ahead of Sunday’s crucial season finale against the San Francisco 49ers.

Seattle is in dire straits at running back at the worst possible time.

Starter Chris Carson, the league’s fifth-leading rusher and one of its most prominent Pro Bowl snubs, fractured his hip during Sunday’s loss to the Arizona Cardinals. Backup C.J. Prosise suffered a broken arm against Arizona, too. Their season-ending injuries came just two days after fellow running back Rashaad Penny underwent surgery to repair a torn ACL.

Seattle finished Sunday’s game with sixth-round rookie Travis Homer next to Russell Wilson in the backfield. He had five carries for 16 yards against Arizona after entering Week 15 with just three career rushes.

Most teams with a quarterback playing at Wilson’s exalted level could get away with largely abandoning the running game if necessary. Not the Seahawks. Carroll’s team has relied more on throwing the ball this season than in years past, but still ranks 28th in pass-to-run ratio.

It’s not impossible to imagine Seattle making a deep playoff run by committing further to the air. But this team’s history of emphasizing the run dates back to Lynch’s heyday; eschewing it almost entirely would amount to a major shift in philosophy as the season hangs in the balance.

Marshawn Lynch Is Better than the Numbers Suggest

Marshawn Lynch hasn’t played since Oct. 14 of last year, when the Oakland Raiders running back suffered a season-ending groin injury in a loss to Seattle. ESPN reported in April that he planned on retiring, but he never filed the necessary paperwork with the NFL.

Carroll insists that Lynch has been “working really hard,” evidence that the five-time Pro Bowler is in playing shape despite being away from football all season.

Moreover, Lynch has taken a full season off before. He retired in February 2016 following his last season with the Seahawks, only to come back to play for his hometown Raiders in 2017 and 2018. 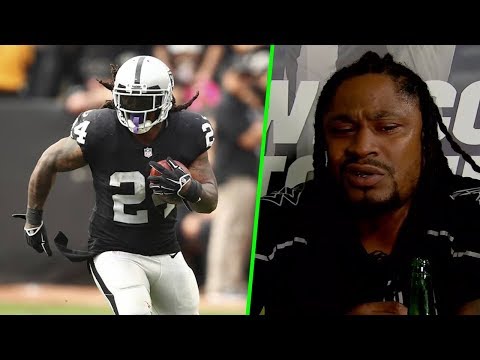 Lynch’s raw numbers with Oakland were unspectacular. He rushed for 1,267 yards and 10 scores in 21 games, averaging 4.3 yards per carry. But a deeper dive into the stats indicates he remained among the league’s toughest runners to bring down, even in his thirties.

In 2018, Lynch averaged a whopping 3.2 yards per carry after contact, second in the NFL. Among the 82 players who notched at least 50 carries, none of them averaged fewer yards before contact than his 1.0.

More Than Just a Physical Lift

Lynch, clearly, has more left in the tank than it often appeared during his two-season stint with the woebegone Raiders. Anyone expecting him to regain the form with Seattle that made him one of the most dynamic playmakers in football toward the top of the decade, though, is setting themselves up for disappointment.

Fortunately, Seattle doesn’t need Lynch to play at an All-Pro level to be successful. Wilson will shoulder an even heavier offensive burden from this point forward, and the Seahawks are reportedly looking to bring back former running back Robert Turbin.

The emotional lift provided by Lynch’s likely return can’t be discounted, either.

“There was nobody that ever amplified the kind of mentality and toughness that we like to play with,” Carroll said of Lynch, per ESPN.

Lynch probably won’t rumble for another earth-shattering run that comes to define Seattle’s season. But the mere possibility of him doing so deflects from the Seahawks’ unenviable situation at running back, clearing the way for Beast Mode magic.