Tuesday was the perfect opportunity for Joel Embiid to emerge from a slump that’s gone mostly overlooked.

The Philadelphia 76ers’ franchise player had 22 points, 10 rebounds, and six assists on 8-of-18 shooting in his team’s 97-92 win over the Denver Nuggets. A closer look at Embiid’s performance, though, suggests he’s owed less credit for the Sixers’ hard-fought victory than those solid but unspectacular numbers suggest.

In another highly-anticipated matchup between Embiid and Nikola Jokic, Philadelphia was thoroughly outplayed when both franchise centers were on the court.

A two-game sample size, of course, is hardly cause for real concern. But coupled with Embiid’s season-long labors, its further confirmation that the Sixers won’t reach their championship-level ceiling unless he starts playing far better.

Talk of Embiid’s lackluster performance has been muted by Philadelphia’s strong play of late. After a disappointing 7-5 start, the Sixers have won 10 of their last 12 games, an impressive stretch that includes several victories over surefire playoff teams.

But just like the Denver game, Embiid has merely been a factor in Philadelphia’s recent success rather than the driving force behind it – a galling development for a player who’s supposed to be an MVP candidate.

The Sixers, as always, have been far better defensively with Embiid in the game. Even as they’ve yet to live up their all-time potential on that side of the ball, he’s a worthy Defensive Player of the Year candidate.

What’s troubling is that Philadelphia, for the first time in Embiid’s career, has been more efficient offensively with him out of the game. Its offensive rating spikes from 103.5 to 110.6 when Embiid is on the bench; no other starter has a negative net offensive rating.

His substandard raw production supports that narrative. Embiid is averaging 22.0 points per game, lowest since his rookie season, and shooting a career-worst 45.8 percent from the field. He has just 15 dunks in 20 games, too, after finishing last season with 106 slams in 64 appearances. 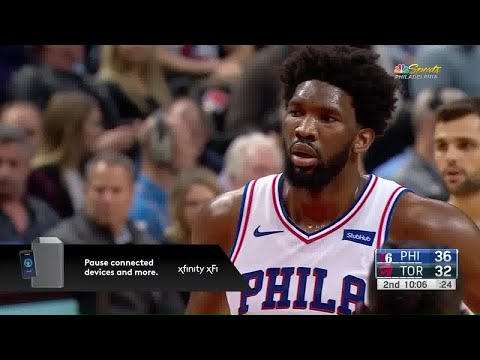 Embiid, frankly, just hasn’t been good enough offensively. Worthy of debate is how big a role his new circumstances with the rebuilt Sixers are playing in his struggles.

Most preseason concerns about Philadelphia’s lack of shooting and playmaking revolved around Ben Simmons. But absent a game-changing floor-spacer like JJ Redick and playing most of his minutes next to another big in Al Horford, it’s Embiid who’s been most negatively affected by his team’s revamped roster.

“Obviously, it’s not the same as last year, so the adjustment has been hard, but I am going to do whatever I’m asked to do every single night,” he said on Tuesday, per Erik Chambliss of CBS Philly.

In prior seasons, Simmons’ complete lack of shooting range was the only thing getting in Embiid’s way offensively. That’s not the case anymore. Not only have Philadelphia’s shooting and spacing woes been compounded, but it’s increasingly short on ball handlers capable of helping Embiid get easy looks.

And as the season wears on and the playoffs grow closer, there’s no workable fix available for the Sixers to address those shortcomings.

Sixers Star Must Get Back to His Old Self

If there’s a silver lining here, it’s that Embiid is meeting his challenges head-on. As difficult as finding his way in a new offense has been, he’s adamant a concerted effort to be more stoic on the floor has adversely impacted his play, too.

Fortunately for Philadelphia, Embiid plans on getting back to his old self.

The problem for Embiid is that not even a return to his fun-loving, trash-talking ways will fix the Sixers’ structural issues offensively. And unless Embiid ultimately proves good enough to overcome them by himself, it seems clear Philadelphia won’t be good enough to compete for a championship.