The New York Knicks were being blown out by one of the league’s worst teams at Madison Square Garden on Sunday, and James Dolan had seen enough. At halftime of the Knicks’ double-digit loss to the Cleveland Cavaliers, he summoned the organization’s top basketball decision-makers to his office, demanding explanations.

After the game, president Steve Mills and general manager Scott Perry stood in front of reporters for an impromptu press conference. They expressed public displeasure with the Knicks’ 2-8 record yet clung to optimism about the team’s long-term trajectory. 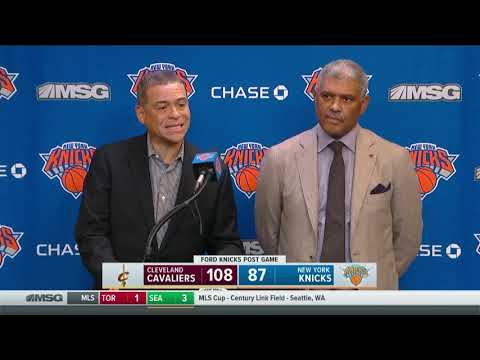 But Dolan’s reported demand that Mills and Perry address the media only made matters worse. Not only did it serve as the latest example of New York’s time-honored organizational dysfunction trickling down from the top but further proof of the Knicks’ misunderstanding behind success in the modern NBA.

Misplaced Confidence In A Misshaped Roster

It’s not exactly surprising that Mills and Perry insist they still believe in New York’s roster. Indicating otherwise would be an admission of failure from those directly tasked with putting a winning product on the floor. But a middle ground exists between acknowledging the Knicks’ lottery-bound fate and ignoring the personnel issues that make it inevitable.

In a league ever reliant on playmaking, New York doesn’t have a starting-caliber point guard on the roster. Its most dynamic ball handler is a teenaged rookie with a streaky jumper. The Knicks are loaded with forwards who are most comfortable creating their own offense, robbing the team movement that most readily produces high-value shots.

More problematic is this roster’s competing factions of proven, unspectacular veterans and inexperienced, gifted youngsters. As a result, New York finds itself stuck between playing for the present and prioritizing the future, a dynamic that leaves little room for silver linings as losses mount.

Dub this sequence with the Benny Hill music — 3 misses in the paint. Cavaliers 54, Knicks 36 at the half. All the good feels from Dallas are gone for New York. Knicks have missed 13-of-15 3s and 6-of-8 free throws. They're shooting 37.2 percent from the floor. pic.twitter.com/UgSLDyv4b0

Worse? It was easy to see these troubles coming when the Knicks were forced to pivot away from their plans in free agency.

It’s not David Fizdale’s fault that Kevin Durant and Kyrie Irving signed with the Brooklyn Nets in July. It’s not Fizdale’s fault he’s coaching the most redundant, raggedy roster in the NBA, either.

Just don’t tell that to management.

While Mills and Perry stressed the need for patience with Fizdale, harping on a lack of “consistency,” “effort,” and “execution” – verbal gymnastics to avoid directly criticizing coaching – made it abundantly clear that the Knicks are considering a change on the sidelines. Subsequent reporting that Fizdale was on the hot seat even before Sunday’s loss lent credence to that assumption, too.

Fizdale, though, doesn’t seem worried one way or the other. Highly-respected in coaching circles, his NBA employment is hardly contingent on New York alone, and the locker room is already providing him staunch support.

David Fizdale: "We’re in this together, obviously, but I take the brunt of this responsibility because I’m the head coach."

Marcus Morris: "At the end of the end day fuck the Xs and Os. We have to come out and be better."

Say what you will about the Knicks’ roster. Fizdale bears some culpability for lineups that fail to put his players in position to succeed, too.

But New York’s ongoing suffering lays most at the feet of Dolan, whose apparently unavoidable penchant for public relations blunders has turned his team into a laughingstock.

It was Dolan who implicitly promised last March that Durant would sign with the Knicks. It was Dolan who reportedly balked at offering Durant a max-level contract, ensuring the two-time Finals MVP wouldn’t give New York a meeting. It was Dolan who ejected franchise legend Charles Oakley from Madison Square Garden in February 2017. It was Dolan who had a fan removed from his seat at Sunday’s game for chanting “Fire Dolan!”

And it was Dolan who, hours later, turned the Knicks’ loss to the Cavaliers, disheartening as it was, into an unnecessary and public referendum on the increasingly depressing state of his franchise.