Cassius Stanley is giving Zion Williamson a run for his money, or rather, a jump for his money. According to the Duke men’s basketball Twitter account, the freshman has set the team record for the maximum vertical leap.

We’ve had some alarmingly athletic hoopers. Cassius has the new record. 👀😈⚠️ pic.twitter.com/2xLlsX2P3I

This comes one year after Williamson himself set the record. He would go on to become the consensus National Player of the Year before the New Orleans Pelicans drafted him first in the NBA draft.

Williamson is easily the most-hyped player to enter the NBA since LeBron James in 2003. Don’t expect the same path for Stanley. 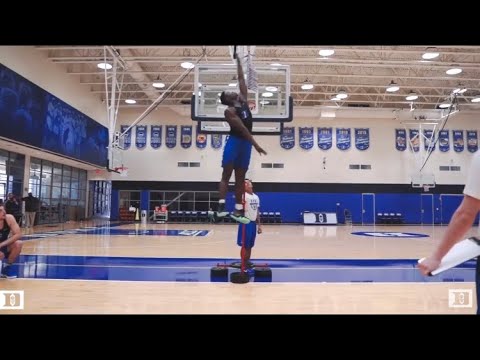 Cassius Stanley is not Zion Williamson

Let’s be clear, Cassius Stanley is a really good basketball player. That’s why he’s at Duke. But just because he can jump out of the gym doesn’t mean he’ll go on to become one of the most celebrated college athletes of all-time and a potential generational superstar.

Basketball has a long history of iconic leapers who fall flat at the NBA-level.

In fact, according to a list from sportscasting.com, the five highest flyers currently in the NBA spend most of their time sitting on the bench. With the exception of All-Star Victor Oladipo, who comes in fourth with a 42-inch vertical, none of the top leapers are NBA starters.

Of course, it’s not a bad thing to have an insane vertical. The greatest basketball player of all-time, Michael Jordan, often comes up as number one on lists of the all-time highest jumpers.

Duke’s Cassius Stanley Should Take His Own Path

The 6-foot-5-inch shooting guard out of Los Angeles was ranked 37th by 247sports in this year’s highly-touted recruiting class. That’s good enough to place him 3rd among all shooting guards. Meanwhile, ESPN has him ranked 32nd overall. As a senior at Sierra Canyon School in Chatsworth, CA, Stanley averaged 17.8 points, 6.2 rebounds, and 2.9 assists per game.

Past players with similar rankings haven’t always been a lock to become superstars, but they also rarely have the athleticism of Stanley. As long as he doesn’t have to continually jump over the shadow of Zion Williamson, Cassius Stanley has a shot to be good.