The Browns, a trendy Super Bowl pick following a hyperactive offseason that netted them multiple stars, were officially eliminated from playoff contention last week with a loss to the Arizona Cardinals. As talented as Cleveland is, its collection of grandiose personalities has proven destructive, a problem for which there’s no easy fix.

Beckham, though, is undeterred by the Browns’ abject failure to surpass or even meet expectations. Not only is he fully committed to Cleveland, but Beckham is adamant better times lay ahead for himself and his teammates.

"I’m not going anywhere. I’ll be here. We’ll figure this thing out. It’s just too special to leave.”

The notion that Beckham has no plans on playing elsewhere shouldn’t be newsworthy given his contractual status. The three-time Pro Bowler signed a five-year, $90 million deal with the New York Giants before last season, leaving him under contract with the Browns through 2023.

But a season rife with turmoil took a turn for the worse last week, when reports surfaced that star receiver Jarvis Landry, one of Beckham’s closest friends, openly asked the Cardinals to “come get him” via trade. On Tuesday came word that Beckham had told the Pittsburgh Steelers the same when the Browns visited Heinz field on Dec. 1.

Rumors regarding the future of a player like Beckham routinely run rampant, especially during times of team and individual struggles. The prospect of player movement drives discussion and engagement from fans year-round.

But Beckham poured fuel on that always-burning fire earlier this month, when he answered a question about his desire to play with the Browns next season by getting existential. 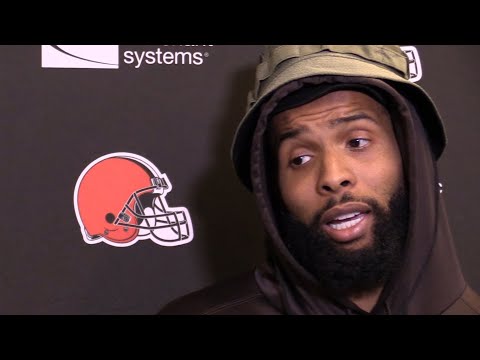 Obviously, Beckham’s about-face less than two weeks later deserves a grain of salt. He’s more aware of his reputation than anyone else, and knows full well he’s best-served by playing good soldier as the offseason quickly approaches – whether he wants to stay in Cleveland or not.

But for a Browns team looking any silver lining as another disappointing season comes to a close, Beckham’s supposed change of heart is good news nonetheless.

Do Odell Beckham & Co. Have Reasons for Optimism?

But even if Beckham and Landry remain in Cleveland going forward, the team’s reasons for optimism won’t be any different than they were coming into 2019.

With pass-catching weapons like Beckham, Landry, and tight end David Njoku, running backs like Nick Chubb and Kareem Hunt, and a quarterback like Baker Mayfield, the Browns boast as much offensive firepower as any team in football. If the offense plays anywhere near its peak, they certainly boast the defensive talent necessary to play consistently winning football, too.

If the Browns bring back the band, is there really much justification to expect them to be significantly better next season?

Even internal improvement gleaned from more continuity and a renewed commitment to the team wouldn’t necessarily result in Cleveland contending in the AFC. The Baltimore Ravens and Kansas City Chiefs look like perennial juggernauts, with the Houston Texans and Buffalo Bills nipping at their heels. The New England Patriots aren’t going anywhere, either.

Talent alone isn’t enough in the NFL. After wasting their first season together, Beckham and the Browns will at least have the opportunity next season to prove the whole can be more than the sum of their parts – assuming, of course, that he doesn’t have another change of heart.