Last night was a big one in U.S. politics. Donald Trump was acquitted by the Senate in his impeachment trial, even though a member of his own party voted to remove him from office. But all of that has been overshadowed by Nancy Pelosi’s “rip heard round the world.” 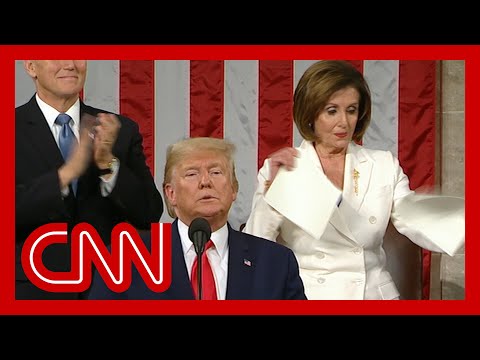 Pelosi tore Donald Trump’s State of the Union address in half on national TV while standing right behind him earlier this week. Her decision was praised by some as a bold move and chastised by others who said her lack of self-control was appalling.

But new footage shows Nancy Pelosi planned the whole thing, confirming that the Democrats have absolutely no idea how to upstage Donald Trump.

Here's Pelosi testing to see if she could rip the speech before the speech even started. She was planning to do it from the start. pic.twitter.com/1gEMlYrNB7

Pelosi pre-ripped her copy of the speech to make sure she could tear it in half with grandeur when Trump finished.

The fact that she was so calculated in her jab at Donald Trump takes away from its impact and instead plays right into Trump’s narrative that the Democrats are a bumbling group of incompetent politicians.

Not only was Nancy caught planning her heat-of-the-moment defiance, but she’s dominating the headlines as Republican lawmakers condemn her actions.

The Senate impeachment trial was always going to end along partisan lines. The fact that Mitt Romney, a Republican, voted to convict Donald Trump was about as close to a win for the Democrats as possible.

Yet Romney’s “heroic” vote has been completely overshadowed by Pelosi’s ridiculous behavior.

Matt Gaetz, a Republican congressman from Florida, is filing ethics charges against Pelosi for “a potential violation of law.” Gaetz is asking the committee to open an investigation into Pelosi’s “flagrant violation of decorum.”

Other Republican lawmakers have followed suit.

As expected, Democrats were angered at Republicans’ outrage over Pelosi’s actions. Nevertheless, it distracted from Trump’s impeachment trial.

On Twitter, #MattGaetzIsATool is trending over #MittRomneyAmericanHero. The bottom line is that Pelosi’s actions at the State of the Union are dominating the conversation.

That’s a good thing for Trump, who likely wants to move past the impeachment quickly so it doesn’t damage his re-election campaign.

If the Democrats want to kick Trump out of the White House, they’re not going to do it by beating him at his own game. Trump’s ability to control the narrative and make it work for his own agenda is unparalleled.

Pelosi proved this week that she simply doesn’t have that same power. Her calculated attempt to undermine the president horrifically backfired.