When you stream an online multiplayer game, it’s not enough to police your own language; you must also worry about the other players’ vocabulary. Twitch star Myth learned that the hard way during a recent Darwin Project stream, and fans worry that his misfortune could land him in Twitch jail next.

While streaming Darwin Project, Myth failed to mute the free-to-play battle royale’s lobby. Within seconds, a torrent of racial slurs began to blast through the public voice chat. 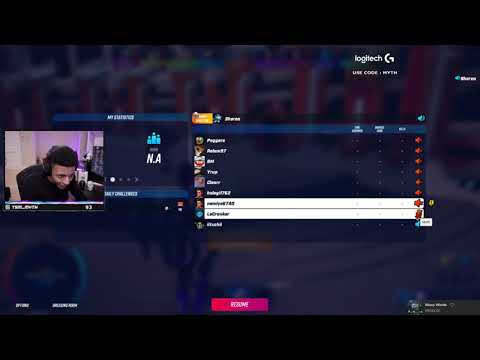 The look of panic on Myth’s face is palpable.

As soon as he hears the first n-word, he starts frantically slapping at his keyboard. He’s clearly trying, and failing, to get the player list up to mute everyone as quickly as possible.

He eventually succeeds – but not before the other foul-mouthed Darwin Project player manages to spew his vitriol to Myth’s 5.7 million followers.

Hopefully, the esports pro will be a bit more cautious when entering random game lobbies in the future.

It’s a cautionary tale for other streamers.

Twitch hasn’t been shy about handing out bans – and not always for good reasons. The site’s lack of consistency and scatter-fire approach to banning streamers should give everyone pause.

While it’s possible that nothing will happen to Myth, Twitch’s enforcement policies couldn’t be much murkier. He shouldn’t be banned for another player’s behavior, but it’s telling that we can’t say with confidence what might happen here.

This is one reason that celebrity gamers have been jumping ship to Mixer, Facebook, and YouTube. And if Twitch screws this one up, maybe these competitors will add another streamer to their payroll.