As news spread that Cleveland Browns defensive end Myles Garrett had been cleared to return at the start of the NFL season, I asked myself a question that first popped into my head when the incident occurred.

What if he had smacked Tom Brady over the head with his helmet? Or Aaron Rodgers? Or Drew Brees?

What if it hadn’t been the backup QB for the Steelers?

The NFL Is Notorious for Double Standards

We all know the answer.

If this had been a franchise quarterback instead of “just” Mason Rudolph, we’d have seen a hell of a lot more than a six-game suspension!

The Browns, of course, are happy to have him back. But then again, this is an organization that’s infamous for overlooking their players’ bad behavior.

We welcome Myles back to our organization with open arms. We know he is grateful to be reinstated, eager to put the past behind him and continue to evolve and grow as a leader. We look forward to having his strong positive presence back as a teammate, player, and person in our community.

Grow as a leader? Are you kidding me?

What If Myles Garrett Hadn’t Been Drafted First Overall?

Does anyone remember Vontaze Burfict? The undrafted linebacker who saw a 12-game suspension for repeated rule violations?

That’s on top of losing $5.3 million in fines and lost salary.

Is smacking someone on the head with their helmet – almost killing them in the process – really just half as bad as what Burfict did?

Myles Garrett would have earned a much harsher sentence had the quarterback on the other side of his helmet smash been someone with a higher profile. Or if Garrett hadn’t been the first overall pick in the 2017 draft.

It seems that the more valuable the player is to the NFL, the easier they can get away with infractions against players with lesser name value.

Even Stephen A. Smith Knows the NFL Blew This 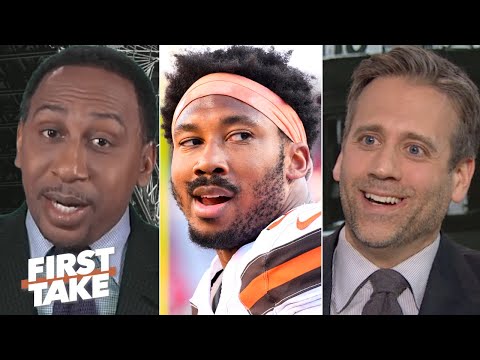 It’s not every day you can say this, but Stephen A. Smith is right.

The NFL should have forced Myles Garrett to sit out the start of the new season. That would have sent a much stronger message than welcoming him back into the fold during the offseason.

But the NFL and Roger Goodell have no real interest in doing what’s right. Unless you mean what’s right for business.