Manchester City is currently 22 points behind Liverpool in the Premier League. The domestic challenge is over and now all focus must be on the Champions League, where they have the unenviable task of facing Real Madrid.

Meanwhile, in Barcelona, Lionel Messi is raging against the club’s sporting director and rumors of him being ready for a new challenge gain more steam by the day.

By coming together, the future would look much brighter for both parties.

The careers of Lionel Messi and Cristiano Ronaldo will always be entwined. Both have dominated world football for the best part of the last 15 years.

The problem for Messi is that for the very first time, it seems his career is stalling a little in Barcelona. While Ronaldo continues to hit new heights in Juventus.

Messi was indeed crowned the world’s best player only last season. But many felt this was a generous award considering the efforts of the Liverpool players.

Based on the season so far, and with the Euros to come in the summer, Ronaldo would seem on track to take back his crown and equal Messi’s record of six.

If Messi still wants to compete with his rival and leave no doubt as to whose legacy will last longest, he should make a move to Manchester City.

The current season has shown how stale things have gotten for Manchester City and Guardiola. They have been unable to keep pace with Liverpool and everything seems a little off.

The club needs new impetus if Guardiola is to leave a true mark in England.

Bringing in Messi would be the biggest ever signing for the club and the Premier League, and it would surely spur City on to challenge for it all again next season.

Money Not An Issue

President Bartomeu has stated in the past that Messi could leave for free in the penultimate year of his current contract. That would be this summer.

Of course, Barcelona would not accept its greatest ever player leaving free to a direct rival. At the same time, it would seem unlikely that they would stand in his way if he did express a wish to leave.

The 100 million euro fee that Juventus paid Real Madrid for Ronaldo would seem a fair price for Manchester City to pay. And one that they would have no trouble finding if a transfer was possible.

Barcelona would no doubt be devastated to lose its talisman, but at least the cash would soften the blow.

The Reasons Against a Move 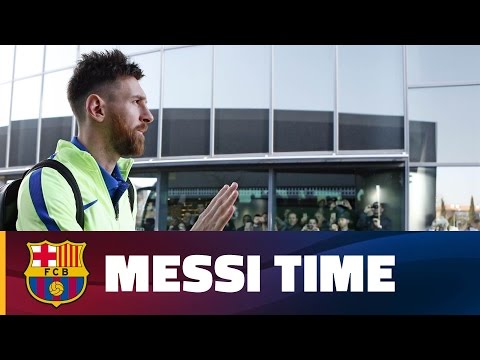 On paper, Messi to Manchester City makes a lot of sense. In reality, it may not be a move that Messi and his family would like to make.

The Messi family loves the style of life they enjoy on the outskirts of Barcelona by the Mediterranean Sea and they would not get anything close to that environment in Manchester.

With Messi also having three young children, this could be another factor that could put the player off the move.

It’s All About the Game

In sporting terms, a successful move to Manchester City would propel Messi back to the very top and allow him to finish his career in style.

Winning the Premier League and maybe the Champions League with Guardiola and his good friend Aguero would cement his status as the greatest ever.

He could also carry this late-career boost into what will probably be his last chance to emulate the great Diego Maradona and bring home the World Cup for Argentina in 2022.