To the NBA’s more casual Christmas audience, Jaylen Brown’s ruthlessly efficient performance in his team’s win over the Toronto Raptors came as a shock.

The Boston Celtics are one of the league’s most pleasant surprises this season. But their success has been driven by enviable depth and a re-commitment to Brad Stevens’ two-way ethos as much as any individual player. Kemba Walker’s role in revamping Boston’s culture has received nationwide attention, and Jayson Tatum’s crucial step toward stardom has, too.

It’s Brown who was the best player on the floor against the Raptors, though. 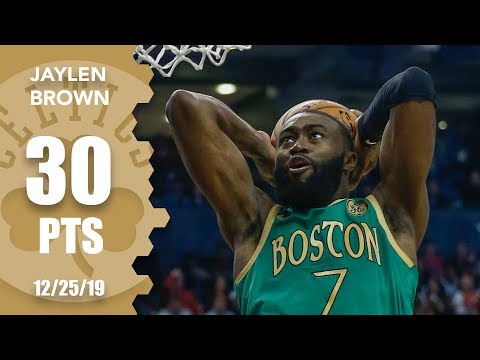 Eyebrows raised across the NBA in October when Boston inked Brown to a four-year, $115 million contract extension.

Few doubted his ability to impact the game at a playoff level on both sides of the ball. Broad skepticism centered on the likelihood Brown possessed the room for growth necessary to live up to his new deal. Tatum’s near-consensus existence as the Celtics’ next superstar wing made him seem redundant, too. 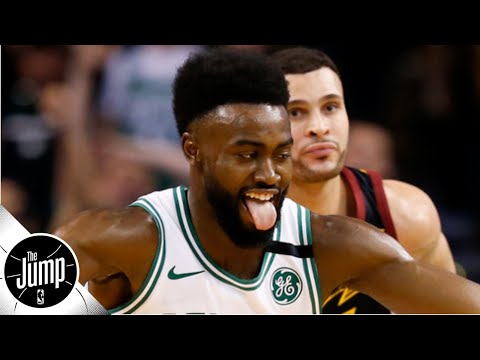 But almost a third of the way into 2019-20, Brown is playing by far the best basketball of his career, making strides many thought might never come. He’s averaging 20.2 points, 7.0 rebounds, and 1.1 steals per game, with an elite true shooting percentage of 61.4 – all easy career-highs.

Brown is shooting 58.4 percent on two-pointers, nearly six points better than last season. His significant strides as a three-point shooter are layered. Brown’s 38.7 percent accuracy on catch-and-shoot triples is solid, but it’s his 42.3 percent shooting on off-dribble threes that’s most indicative of his sweeping skill development.

Brown was earmarked as a high-level prospect in high school due to his superlative physical profile. At a sturdy 6-foot-7 with long arms, quick feet, and explosive leaping ability, he owns every athletic trait required of superstar wings and more.

Brown’s jumper has been far better than anticipated throughout his career. A non-shooter during his lone collegiate season at Cal, he’s been a legitimate three-point threat of varying degrees since he entered the league in 2016.

Further comfort from the perimeter has been instrumental to Brown’s growth. But even that is at least somewhat rooted in the borderline stunning improvement he’s made with his handle. Limited as a penetrator before this season due to his lack of wiggle with the ball, Brown is now crossing up defenders to a highlight-reel extent on an almost nightly basis.

Jaylen Brown was in his bag! 🎒 pic.twitter.com/eftf56GKgL

That newfound proficiency to get defenders off balance with his handle has made Brown a far more dangerous attacker.

He’s averaging 8.8 drives per game, almost double last season’s career-best. Brown is shooting 68.5 percent from the restricted area, too, nearly six points higher than last season and over 10 points better than his first two years in the NBA.

Frankly, it doesn’t really matter who the Celtics’ best player is. None of their candidates are good enough to be considered among the game’s true elite, and it’s the collective strength of their top-five players that will always loom largest to their success.

But as Walker is feted, Tatum is anointed, Gordon Hayward is applauded, and Marcus Smart is celebrated, Brown’s ongoing evolution has been largely ignored outside of Boston. Chances are that it won’t be for long.

His All-Star case speaks for itself, and coaches – tasked with picking All-Star reserves – highly value the two-way effectiveness Brown brings to the table. He should be playing in Chicago come mid-February.

"It would be extremely dope to even be mentioned in the conversation. To be honest, I still think I can be a lot better and think the best is yet to come for me this season."

But even that honor won’t dispel the notion that Brown ranks relatively low on the Celtics’ totem pole. What might? More dominant showings on the national stage.

And if Brown’s play early this season and on Christmas are any indication, it will only be a matter of time until they come.