The Dow Jones roared higher on Monday, as Apple surged amid a rally in the tech sector.

The brighter mood was also about China, as positive manufacturing data and a flat denial from the White House regarding limiting US stock market investments in China lifted the Dow.

The rally proceeded despite a sinister threat from President Donald Trump on Twitter that went mostly unnoticed amid an impeachment tweetstorm.

The Nasdaq and S&P 500 also rose to start the week, ignoring a weak Chicago PMI. It was the tech sector that led the way. The Nasdaq has endured the worst of market volatility amid Trump’s trade war but was the biggest beneficiary in benign sentiment on Monday.

Despite bright market conditions, crude oil succumbed to the mighty USD, falling 3.13% to $54.16.

The Dow Jones did not enjoy the impeachment circus last week. Even as Donald Trump ramped up the intensity of his Twitter attacks on Democrats, traders continued to focus on the vibrancy of the Chinese economy, along with optimism that talks are not in deadlock.

One tweet which markets largely ignored might come back to haunt the president in trade talks, as it appears to be a strange combination of sarcasm mixed with a threat.

….place in TRADE, it’s taking shape in Military Competition.” Johnathan Ward, author and China expert. We are winning, and we will win. They should not have broken the deal we had with them. Happy Birthday China!

Wishing China “Happy Birthday” after talking about the need to resist China’s growing economic and military might, Trump appears to suggest that the temporary detente may not last.

Stock market volatility is the name of the game at the moment, as the Dow looks indecisive about whether to press on to fresh highs or be more concerned about the worsening outlook for global growth. Many investors follow the VIX (CBOE Volatility Index) as it tracks how nervy things are getting for equity markets.

Economists Andreas Steno Larsen and Martin Enlund at Nordea Research believe that October might not be the smooth ride that the end of September is proving to be for the Dow, as their report states:

“For some reason VIX almost always spikes in October/November. The list of potential triggers for such a move this year is long. 1) A new move from BoJo in the Brexit-mess, 2) the impeachment process triggering more geopolitical hawkishness from The Donald, 3) Trade negotiations restart @ 10th of October, 4) Continued USD scarcity (until the Fed really wakes up), 5) a bad Q3 reporting season and 6) Firmer evidence that the US administration is pondering controls on portfolio flows in to China… Q4-2019 looks weak”

It was a generally very positive day for the Dow 30, as Apple rose an impressive 2.5% after J.P. Morgan raised its price target for AAPL stock. IBM was also in top form, jumping 1.8%. 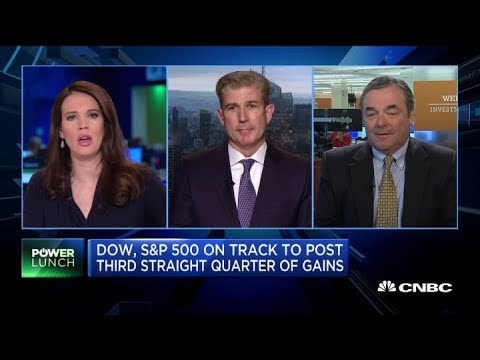 Boeing dropped on the news that the company would be implementing a vast overhaul of its safety protocol. Markets appeared to interpret this as bearish news, as it signified evidence that Boeing’s costs may increase. It also demonstrates the company formally shouldering a large amount of blame for the 737 MAX disasters.