The Dow Jones Industrial Average bounced more than 150 points on Monday, but the index’s most heavily weighted stock, Boeing, failed to receive an invitation to the party.

Heading into early afternoon trading, Boeing stock had declined by 1.14% to $378.50, making it far and away the worst performer among the Dow’s 30 members.

The next worst performer, Exxon Mobil, declined just 0.45%. Goldman Sachs, Pfizer, and 3M were the only other DJIA components to report losses.

Boeing investors appear to be reacting to a mish-mash of negative headlines, including a Wall Street Journal report that raises questions about whether the two tragic 737 MAX crashes could have been avoided altogether.

According to the Journal, Boeing’s flight-control system – MCAS – originally featured crucial safeguards when the aerospace giant first created it for the military more than a decade ago. However, those safeguards – namely a system that relies on multiple sensors rather than one and also gives pilots more control during MCAS failures – were left out of the 737 MAX’s flight-control system.

Crash investigators continue to point to MCAS as a likely culprit behind the two accidents that killed 346 people.

Meanwhile, the Federal Aviation Administration ordered inspections of another Boeing 737 model after the company discovered a “cracking issue” in a “small number” of 737 Next Generation planes. In response, Boeing published a statement this afternoon reaffirming its commitment to “products and services safety.”

Adding to the negative mood, UBS released a survey indicating that growing climate awareness among consumer could lead to a long-term decline in the number of long-haul flights that create demand for Boeing’s most popular jets. 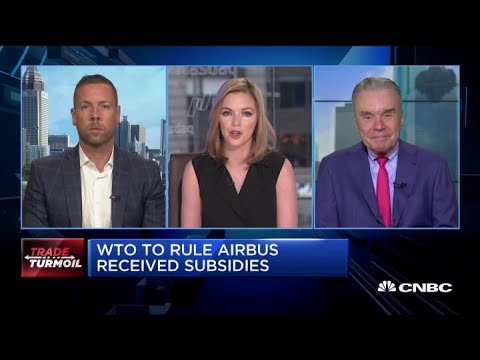 Finally, Boeing risks finding itself trapped in the middle of another trade war, as the World Trade Organization (WTO) prepares to issue what insiders say will be a record ruling in a US-EU dispute over aerospace subsidies.

Reuters reports that the WTO will likely award the US $7.5 billion in tariff retaliation rights as compensation for the European Union’s illegal support for Boeing’s chief rival, Airbus. A parallel case – which found that the US provided Boeing with illegal subsidies – could authorize the EU to institute new tariffs of its own.

Boeing has already suffered amid the US-China trade war. The company said earlier this month that China’s aircraft industry presents a $2.9 trillion opportunity for manufacturers over the next 20 years, but CEO Dennis Muilenburg warned that the trade war threatens Boeing’s ability to capitalize on that mammoth windfall.

Boeing stock has fared remarkably well during 2019, despite twin pressures from the trade war and the 737 MAX debacle.

BA shares have climbed more than 15% since Jan. 1, outperforming the overall Dow Jones Industrial Average and faring similarly to the S&P 500.

According to data compiled by TipRanks, Boeing analysts rate the stock a consensus “Moderate Buy” with an average price target of $419, implying nearly 11% worth of upside.

Josiah Wilmoth
Josiah is the former U.S. Editor at CCN.com, where he focused on financial markets. His work has also been featured on Yahoo Finance and Investing.com. He lives in rural Virginia. Connect with him on LinkedIn or Muck Rack. Email him directly at josiah.wilmoth(at)ccn.com. Josiah Wilmoth is a Trusted Journalist.
Subscribe
0 Comments
Inline Feedbacks
View all comments
← PreviousElon Musk Doesn’t Believe Aliens Exist, but He’s Worried They Might
Next →Netflix Overpays Again in 9-Figure Deal for Stranger Things’ Bros