The Dow Jones rallied 170 points on Wednesday as the stock market largely ignored the impeachment chaos in Washington. Donald Trump released the transcript of his call with Ukraine, and investors didn’t see anything that altered the view that the president will survive an inquiry.

The Dow Jones Industrial Average rose throughout the morning session. By late afternoon, the Dow had jumped 167.29 points or 0.62%, more than recouping its losses from the previous day. The DJIA last traded at 26,975.06.

It was a US-centric day in global markets, as a massive rally in the US dollar crushed commodities. A significant slide in the British pound of more than 1% on UK election fears also sent EUR/USD 0.68% lower. The move higher in USD helped to further accentuate the decline in crude oil after a larger than expected build in inventories. A strong dollar also saw major sell-offs in gold and silver.

Despite a stronger currency, the Dow Jones, S&P 500, and Nasdaq were all able to rise on the day despite stock market weakness in Europe.

There is no question that the Trump-Ukraine-Biden impeachment storyline’s escalation is a problem for the Dow Jones, at least if the president was removed from office. For now, it is clear that traders don’t believe that the political makeup of the Senate allows more than an affirmative vote in the House. 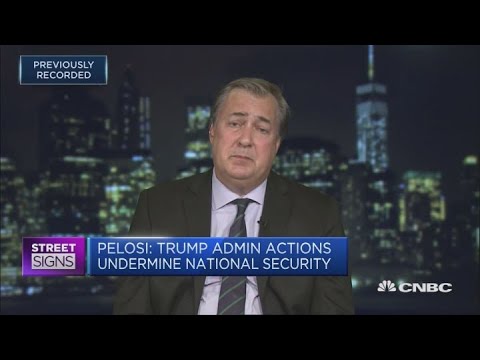 Looking at the content of the infamous transcript, there is one element that will be utilized in an impeachment hearing. This will be Trump’s explicit request that Ukraine’s prime minister “look into” the controversy around Joe Biden and his son. Adding to the potential controversy is that the “transcript” was technically a memo and not a verbatim record.

So far the Dow Jones has taken this uncertainty as a positive, not a negative, as the lack of clarity shields Trump.

Analysts at Scotiabank provided the following historical roundup of the effects that impeachment proceedings have had on the US stock market.

This report offers quite an encouraging outlook for the Dow once the actual formal proceedings begin, as Shaun Osborne, the firm’s chief strategist, writes:

Focusing on more positive things for the Dow Jones, US new housing sales surged considerably more than expected, with a 7.1% rise against the expected 3.5% increase. This shows a remarkable rebound from the previous month’s 8.5% decrease and offsets the recent dip in consumer confidence.

It was party time for Nike investors, as the sports apparel giant led the Dow 30 with a more than 4.3% rally. The climb was thanks to a tremendous, trade war dodging earnings release that showed 20% sales gains in China.

Adding to the positive mood, Apple and Boeing both rose more than 1.4%. The move in BA appeared to be triggered by a settlement over the Lion Air disaster.

Coca-Cola lagged the index, down 0.25% as it gave up some of its recent gains. A stronger US dollar is a potential headwind for a multinational like KO.